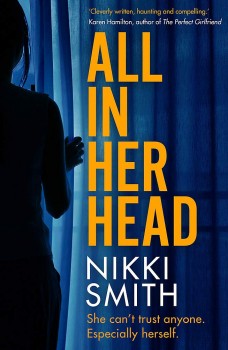 All In Her Head

Jack is back, and Alison is terrified – for her safety, her sanity and her life. But she cannot remember why.

Alison works in the relative peace and quiet of a library in a large and bustling building. The canteen is usually heaving but she has bagged a quiet table. At the end of her working day, she unwinds in her small, peaceful flat. Life is dull but calm. Until, through her slightly obsessive need for order and cleanliness, she notices inconsistencies. Objects move. They disappear. And reappear. And Alison is certain her ex-husband, Jack, is at the bottom of it all.

She is increasingly overwhelmed with panic and despair. Other than her boss, who is anything but nurturing, Alison has no one to talk to. She feels more alone than ever, convinced her world is hanging over a precipice. With no one she can trust, Alison struggles with what is real and what is imaginary as the lines between truth and lies blur.
Alison knows she is being followed and that the man pursuing her is Jack – a man she knows she should be afraid of but cannot remember the reason why. She cannot decide if her imagination is playing tricks on her.
And there’s the woman who has invaded her quiet space at lunch and is insistent on talking to her. Alison is sure she knows her but cannot remember from where. Then she hears a name that opens the floodgates in her mind. And Alison now knows she is in danger.
First, I would like to applaud Nikki Smith for her debut novel. She has found her voice, and pays excellent attention to balancing action, dialogue, introspection and description. Moreover, she has mastered misdirection and squeezing ghosts between the lines.
However, I felt she tried too hard to create edge and tension, and I came away having read a heartrending story more than a psychological suspense novel, as described. And although the characters are believable and reasonably three-dimensional, I felt sad for their circumstances but no empathy with them as people. Alison lacks charm, and, obviously, is self-obsessed. Jack is wallowing in self-pity and really needs to sort out his unhealthy relationship with the bottle. Neither of them possesses redeeming features that would have helped this reader to connect.
This book comes with a slow-burning, emotional story, though slightly melodramatic in places, that will keep many guessing until the end. It deals sympathetically with two difficult subjects: postpartum depression and a form of PTSD that comes from suffering tragic and dysfunctional childhood family dynamics.
It questions the likelihood of history repeating itself down the generations. It demonstrates the incredible distance depression can wedge between reality and fantasy. The believable story is a tribute to educating the reader in the catastrophic power of guilt, real or imagined.
However, I had a hard time believing that even a damaged soul like Alison could categorise Jack’s demeanour as a crime to be terrified of. It left me feeling cheated, desperately wanting to shake her. And despite the abundant twists and red herrings, the ending was rather too twee for me. It is not the first or last time I will say it; fairy-tale endings are for those who believe in fairies.
All In Her Head is, though, a great debut, showing a healthy degree of senses-driven writing, accomplished with polish and finesse.