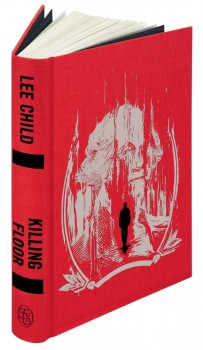 Jack Reacher gets off a long-distance bus near to the small town of Margrave. His subsequent arrest is the beginning of a mystery that he needs to solve. Exactly who can he believe?

Jack Reacher is a retired military policeman who has yet to settle down. He travels around following his whim and on impulse gets off a long-distance bus in the middle of nowhere, in order to go and look for an old guitar player he has heard of, with the name of Blind Blake.

He walks to the little town of Margrave, calls into a diner, and then is suddenly surrounded by cops and gets arrested. He ends up being held in prison over the weekend with another guy who asks for his help. Initially he and the other guy are put in a cell on the wrong floor of the prison, hence the book’s title. When the details of the supposed crime become apparent, Jack realises that his own brother had been killed at a local warehouse. He has to find the culprit.

The plot slowly unravels, maintaining suspense right to the last page. The crime has real substance, not only involving a huge array of characters, but also raising awareness of financial arrangements of the utmost importance to national governments. There is not a clue out of place and the unravelling of the crime occurs steadily and carefully, making sense at each new step.

Reacher is the narrator and so his thought processes form the backbone of the text. He has a very logical, analytical mind, and so it is a joy to travel with him working out what is going on at each stage. A well-known aspect of Reacher’s thinking is his ability to analyse the openings and moves in a physical fight, and there are plenty of these. He is able to see them almost in slow motion and thus work out the winning strategies each time. The stories wouldn’t work if he couldn’t do this as he needs to consistently overcome his many enemies and survive until the end of the book.

In addition to his skill in the fights, Reacher observes his surroundings in a meticulous and detailed way. Consequently, the reader can see clearly the picture he is painting: the house with the front door staved in, the motel room where he takes detective Roscoe for safety, the area under the highway where he hides in order to observe a suspect warehouse, the hobo whom he almost doesn’t notice, the barber’s shop where the old barber gives him a shave. Even the cars in which he travels are described in detail and become an important feature of the solution. In this regard the reader is required to concentrate. Nothing makes sense without the detail.

This Folio Society edition of the book has the added bonus of full-page illustrations by Oliver Barrett interspersed throughout the text. These help to create the atmosphere of the times in small-town America and the style perfectly suits the clipped nature of the narrative. This beautifully produced volume is a worthy product for any collector of Lee Child’s work.