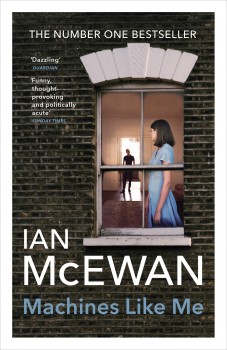 Charlie spends his large inheritance on Adam, a newly developed synthetic human, one of only 25 made. Adam integrates himself into the life of Charlie and his new girlfriend Miranda. But Miranda has secrets and Adam is limitlessly curious and well-equipped to solve problems.

This novel is set in an alternative Britain in an alternative 1980s – a clever device that allows the plot to be explored alongside quirky retellings of history, the Margaret Thatcher influence and the leadership of the Labour Party, among other examples. Alan Turing is a key figure in this other Britain, a pioneer of artificial intelligence.

Charlie has a chequered history – he is a struck-off lawyer who spends all of his newly inherited wealth on Adam, one of 25 newly developed synthetic humans. Charlie lives in a flat below Miranda, a girl for whom he develops increasingly intense feelings. Between them they programme Adam, giving him a mixture of personality traits that they each choose.

From the beginning Adam is unfailingly polite, extremely intelligent and learns at a phenomenal rate. He craves his electrical charging like a starving man, he is endlessly curious and can spend all his downtime surfing the internet finding answers and solutions. Adam can pass as a human, he is warm, seems to breathe, blinks, can drink and even has other bodily functions. He has opinions, thoughts and apparently emotions. But he is not human. So how does one relate to him?

Charlie seeks to make his living by speculative buying on the stock market. He is quite good at it, but Adam is much better and makes a lot of money. At the same time Adam appears to develop emotions and attachments. Is it possible that a synthetic human can learn to love?

Miranda has a secret past. Adam warns Charlie of this on first acquaintance, but Charlie does not know what happened and is unsure if Adam knows and isn’t telling. But Charlie wants to know.

This book is every bit as clever as one would expect from Ian McEwan. The title, as is often the case with McEwan, is ambiguous. Does it mean machines like humans or other machines like Adam or that machines have feelings for me? All of these can be explored in this intelligent narrative.

Philosophical questions of morality, choice-making, and artificial intelligence are cleverly explored in the context of the unfolding lives and relationships of the main protagonists. There is much to provoke thought and to set intellectual challenges. Is Adam Caliban or Ariel or Ferdinand for Miranda in this tale? And can a machine really fulfil any of these roles? This book is exceptionally well-written and thought-provoking, with so many facets and strands.