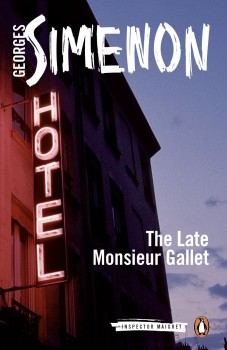 A very ordinary man is killed by an unknown assailant at a hotel in the wine-growing village of Sancerre. There is no apparent motive and the information that Maigret begins to gather serves only to make the case more mysterious.

People of a certain age will remember nostalgically the adaptations of the Commissaire Maigret novels that appeared on British television from 1960 to 1963. They introduced British audiences to a superior kind of crime fiction that didn’t depend on a selection of effete aristocrats being assembled in a room of a country house, where they were informed whodunit. Penguin Classics have decided to publish all 75 of these novels at the rate of one a month over the next six years or so. The Late Monsieur Gallet (Monsieur Gallet, Décédé) is the second in a series which is likely to be warmly welcomed by a new generation.

Paris in June is very hot. The King of Spain is on a visit to the capital and most of the inspectors in the Police Judiciaire have left for the Gare du Bois-de-Boulogne to ensure his security. As the only senior policeman available, Maigret himself has to take on the case of a Monsieur Emile Gallet whose dead body has been discovered at a hotel in Sancerre.

The first thing he does is to visit the man’s wife who lives in Saint Fargeau and from whom he receives a very frosty reception. He tells her the sad news and explains that she will be needed to identify the body. Initially she refuses to believe him and indicates that her husband, a commercial traveller, is on business in Rouen. Furthermore she produces a postcard sent by him to prove it.

Eventually, however, she is persuaded to identify the body and it becomes clear to Maigret that she has no idea who would want to murder her husband, nor of the double life he appeared to be leading. Maigret finds himself thinking constantly about the photograph of the late Monsieur Gallet that he had seen in the house - a man so apparently ordinary that he finds it difficult to remember what he looks like.

Monsieur Gallet had first been shot in the face and then, when that failed to kill him, stabbed to death. Maigret feels that the case, which is distinguished only by its utter mediocrity, ought to be a simple one, but his initial interviews with the widow, her son, Henry, and the owner of the adjacent property, Monsieur Saint-Hilaire, all lead nowhere.

The deceased had been staying in one town when he was supposed to be in another, he was there under a false name and he had left the company which he claimed employed him 18 years ago. He appears to Maigret little more than a shadow and the almost contemptuous way in which his wife and son answer Maigret’s questions indicates a lack of concern that leaves him puzzled and determined to find the killer of a man with whom he has come to sympathise. His very human concern with a man who seemed to matter to nobody and whose death appeared to be as lonely as the world he had inhabited gives this novel a poignancy that the routine detective story doesn’t possess.

Eventually the case is solved by, as Sherlock Holmes had it, eliminating the impossible until what remains has to be the truth – something that sounds simple enough, but which requires prolonged and profound thought about the circumstances of Monsieur Gallet’s death. The solution, when it comes, may be a little far-fetched for the modern taste but it is not really the solution that counts. Much more important is the reason behind the singular way of life that the deceased had chosen – a reason that leaves us contemplating, as so often in Simenon novels, the randomness of fortune that determines human existence.