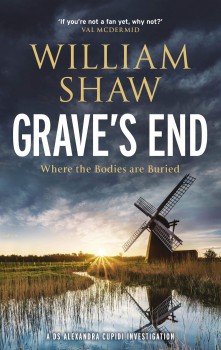 When an unidentified naked body is found in a freezer, the case is handed to DS Alexandra Cupidi. Then a second body turns up and the case gets even more complicated.

Former journalist William Shaw found success with his Breen & Tozer series set in 1960s London and the superb standalone bestseller The Birdwatcher. But his new series featuring feisty Kent Detective Sergeant Alexandra Cupidi is set to top them all.

Alex’s third adventure combines totally diverse plotlines and again demonstrates Shaw’s ability to write about contemporary events with intelligence, well-drawn characters and often divisive themes, all set against the frequently unwelcoming, even hostile, environment of the Dungeness peninsula where the brooding presence of the nuclear power station dominates all.

This time he successfully mixes animal rights and environmental politics with the crisis in housing and the ‘quick buck’ mentality of many developers, encouraged by politicians intent on burnishing their own careers, to expertly manipulate his readers’ emotions, in a many stranded and tautly constructed thriller.

An unidentified naked body is found in a freezer in an unoccupied luxury house by a couple seeking a place for an illicit sexual rendezvous. When Cupidi is handed the case, she has little idea it will lead her to a series of cover-ups and buried secrets – and put her own life in danger.

A second body, that of an elderly woman, is found in her own mobile home and when forensics reveals that both died of hydrogen cyanide poisoning – the dreaded Zyklon B used by the Nazis in the death camp gas chambers – the mystery deepens. It is further compounded by the discovery of the skeleton of public schoolboy Trevor Grey beneath a controversial housing development, the subject of a  battle between environmental campaigners wanting to preserve badger setts on the site and developers keen to kick-start a new government-sponsored housing programme.

Grey’s disappearance, 25 year before from his minor public school, went almost unnoticed. But as evidence suggests his death may be linked to long-buried rumours of sexual abuse, Cupidi, her teenage daughter Zoe and ex-copper friend Bill South find themselves up against powerful, manipulative and dangerous forces.

In what, as in the preceding books, is a moralistic but sympathetic look at the realities and challenges of modern policing, Shaw shines a harsh light on the darker side of society, how power affects how individuals are perceived and how police politics and personal dilemmas affect the lives of those who try to enforce the law.

Single mother Cupidi is rapidly developing into an interesting, likeable and very believable character. A city girl, she’s ex-Met, life in the country is beginning to change her – aided by the emergence of her spikey and independent teenage daughter’s growing interest in the natural world and environmental problems.

Her past has shaped her present – and the more readers see of her the more she will grow on them. Other characters are just as well depicted and Constable Jill Ferriter’s complicated love life provides Shaw with the opportunity both to explore some lifestyle problems and also offer some genuine police banter which balances a story that otherwise could become too dark.

Running in tandem with all this is a carefully researched and beautifully written sub-plot involving the life of one of the senior badgers threatened by the proposed housing development – which offers a clever comparison to the underground life of Trevor Grey’s deeply damaged only schoolfriend.

This is an ingenious, often moving and always powerful story, which brilliantly captures Kent and its social divisions and offers a realistic, if harsh, look at the inequalities of life in modern Britain.