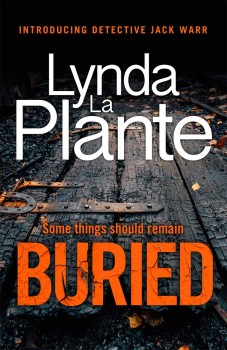 DC Jack Warr discovers the truth of his own birth through links between a charred body in a burnt Victorian cottage and a series of major historical crimes.

It takes a certain amount of nerve to make a detective constable the lead character in a new crime series, but the best-selling thriller factory that is Lynda La Plante makes a superb job of it.

DC Jack Warr, a conflicted character who has never quite realised his potential either as a policeman or a man, is clearly destined for higher things. By the end of this introduction he has already taken a major step.

Warr, with his junior doctor girlfriend Maggie, has moved to London to start a new life together, although the move is driven more by her progress than his. The good-looking and charming Jack, an adopted child, is uncertain of his place in the world and the terminal illness of his adoptive father sparks a desire to discover his natural parent – and an investigation that becomes a riveting historical robbery hunt turns his whole life upside down.

The book also gives La Plante the chance to revisit the lives and criminal legacy of Dolly Rawlins and her gang of Widows and demonstrate her remarkable memory – or research abilities – in using real characters to make her fiction appear believable.

Jimmy Nunn, the man registered as Jack’s father, but who has now disappeared, was a noted racing car driver and ‘wheelman’ – getaway driver – for gangs specialising in heists and wage snatches. His life bears a remarkable resemblance to that of Roy James, a promising driver in Formula Junior, then F1’s training ground, once rated as a successor to greats like Jackie Stewart. James, a silversmith, was a natural athlete who had trials with Queens Park Rangers, became a champion water-skier, then turned to karting, representing Britain at the 1962 European Championships in France, winning four of five races.

With that kind of real-life background, other dives into 1960s crime involve gangland bosses the Fisher Brothers, an unlikely combination of Ronnie Kray and the Richardsons’ enforcer ‘Mad Frankie’ Fraser, and the Train Robbery itself when a masked gang of about 30 ‘fixed’ a signal to halt the night mail from Glasgow on August 8 1963, and escaped with at least £2.6 million in used notes intended for destruction, also have a part to play.

In modern times, Jack is assigned to investigate the aftermath of a fire at an isolated Victorian cottage once owned by a mounted policewoman, when a badly charred body is found, along with the burned remains of millions of old, lower denomination notes.

His search leads him deep into the criminal underworld, where he finds himself surprisingly at home. But as the investigation links inexorably to his quest for the truth of his own identity and lines become blurred, how far will the increasingly aggressive and assured Jack go?

It’s a clever and compelling plot, linking past with present, with a brilliant cast of diverse characters on both sides of the law. While afficionados will be sorry to say goodbye to the magnificent Dolly Rawlins and her associates, this new series shows La Plante is in no danger of her crown as queen of thriller writers slipping.