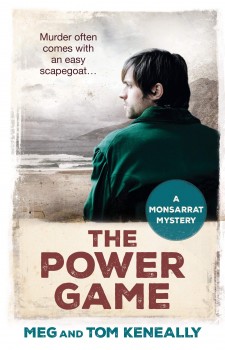 Ticket-of-leave gentleman convict Hugh Llewelyn Monsarrat and his fiery Irish housekeeper Hannah Mulrooney are sent to the penal colony of Maria Island to investigate the killing of the local boatman and blackmailer – and are offered a politically convenient suspect.

The Keneallys are a formidable team – the former journalist and radio producer daughter and her Booker Prize-winning father. But when they announced that their Monsarrat series, featuring a ticket-of-leave gentleman convict, would offer a book a year for the next 12, I wondered whether it would be possible for them to maintain its impact at such an enforced pace.

Hugh Llewelyn Monsarrat and his fiery Irish housekeeper Hannah Mulrooney made a spectacular debut. Their second appearance was possibly even better. But this third outing, this time on the lonely penal colony of Maria Island off the coast of Van Diemen’s Land (Tasmania), lacks some of the verve and originality that made the first two books such enjoyable reading.

Although a little less compelling or plausible, it still offers a sometimes brutal education in Australia’s turbulent early history and the personalities and participants are so well written and so vivid they pull the reader into the story. We forget how young a country Australia is. In some ways this story is almost personal – Meg Keneally’s great, great grandmother was transported from Limerick for stealing clothes – and the convenient main suspect is an Irish baronet based loosely on William Smith O’Brien, a participant in the abortive Irish revolt of 1798.

The Keneallys write beautifully. Their characters are believable because they are so well drawn and the reader empathises readily with Monsarrat and his shrewd, fiercely loyal, mentally alert and sparky housekeeper keeper, now much more a team, in the face of the overbearing and stifling arrogance of those in authority due to birth rather than merit. They also deal with their own yearning to be free of their convict past.

Monsarrat is charged with investigating the murder of Bart Harefield, the boatman who keeps the island connected to the rest of the world and a notable local blackmailer and fixer. The authorities would like to blame a famous and very inconvenient political prisoner, Thomas Power, and use the death as an excuse for his execution. But the victim’s history prompts Monsarrat to look further afield at others who had reason to silence Harefield.

It is a clever, informative and entertaining story, but the format and plot feel a little formulaic and predictable. There’s not that much mystery – experienced and smart readers will identify the murderer quite early on – and in some ways feels like a re-run of the first story with another presumed poisoning of a commandant’s beautiful wife.
But the main protagonists Montserrat and Mulrooney are maturing into a distinctive and formidable detective team, complementing each other and gradually assuming an equal importance in the mind of the reader.

The evocation of place and time is once again splendid, but while this reads superbly as a standalone, as part of a series it lacks some of the freshness of the first two stories with the main entertaining elements the flow of repartee between the two principals – and the antics of the local geese!