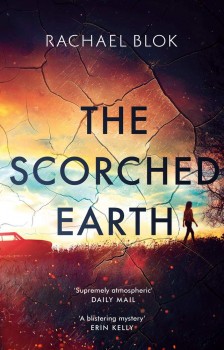 A body, possibly connected to a killing for which a man is already in prison for his brother’s murder, is found in a churchyard. DCI Maarten Jansen, head of St Albans CID, sets out to solve the mystery – and so does the imprisoned man’s girlfriend.

Former teacher Rachael Blok produced an outstanding debut, set in the depths of winter, with Under The Ice which featured a Dutch detective serving with a Home Counties force and a strong and totally believable character of a tired and frustrated young mother who finds she is key to a double kidnap murder of  two girls.

This second in the DCI Maarten Jansen series, set against a background of the flaming June of 2018 as temperatures soared to record levels and Britain prayed for rain, will have readers sweating over what is another a taut and haunting story. It’s the same basic format. Jansen is the solid and methodical policeman – that the procedural side of the story is totally accurate is a tribute to the influence of Inspector Richard Johnson of the Hertfordshire force.

Jansen is a family man who, with his wife and two daughters, is established in the local community. Unlike so many fictional alcoholic, go-it-alone or serially unfaithful fictional detectives, his only personal problem is that he occasionally considers a move back to Rotterdam. It is the sheer normality of his life and the part which the family play in it – together with that of his team – which makes the procedural side of this story so believable.

The lead female role goes to Ana Seabrook, a high-powered lawyer with a record of making poor personal decisions without applying her undoubted logic – and plenty of secrets, confirmed by her back story. Her boyfriend, Ben Fenton, is in prison for the murder of his brother Leo during a camping trip to Blakeney on the Norfolk coast two years earlier. Despite awakening in a ripped tent and covered in Leo’s blood, he has always protested his innocence – and Ana believes him absolutely.

On the hottest day of the sweltering heat wave, a body is unearthed in a shallow grave in the beautiful Palladian churchyard of Ayot St Lawrence, the village where Ana lives. Could the remains possibly be connected to Leo’s death? Jansen, head of St Albans CID, is sure that Ana has something to hide. But until the remains can be identified, he cannot begin to work out any possible connections.

This atmospheric and at times almost unbearably tense tale of guilty secrets, betrayal and revenge is twisty, evocative and suspenseful. It is beautifully told, with the stifling heat helping to further build the tension which crackles through it. Blok’s writing is increasingly assured and compelling and she is as deft about human relationships as she is about creating an increasingly foreboding atmosphere with a steady ratcheting up of suspense as she switches timelines and perspectives from each of her principal characters, Jansen, Ana and the imprisoned Ben.

Her settings, in and around the ancient city of St Albans or the wildness of the Norfolk coast, are lovingly described and add to the sheer normality – and also highlight the horror of the events she describes so well. If I have a minor criticism, it is that I still do not have any real sense of Jansen’s personality. He is an oddity –  a Dutchman serving in a British force, something he is entitled to as an EC national, but not something I ever came across in years as a crime reporter.

Blok cleverly uses his family to detract attention from this problem. In the first book it was his daughters’ friendship with the dead girls, this time a large part of his attention is focussed on his wife who has been badly hurt in a car crash. Nice deflection, but sooner or later readers are going to demand a little more backstory. We know his own parents were killed in an accident, but little else. But how and why did he get to England and how did he make his rank as divisional CID chief? I’ll be looking forward to the next in this promising series to find out!