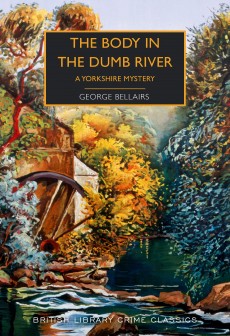 The Body in the Dumb River

The body of Jim Lane is found in a Cambridgeshire river with a knife wound in his back. Scotland Yard Superintendent Tom Littlejohn, in the area on another case, is asked to assist by local police and quickly discovers popular showman Lane is not who he seems to be.

Manchester bank manager and noted philanthropist Harold Blundell – George Bellairs was his literary pseudonym – wrote more than 50 novels in a long career beginning in 1941 and continuing almost to his death in 1982. Figuratively and literally ripped off by his publishers, a point Martin Edwards makes clear in his introduction, he wrote mainly for his own pleasure, but despite early success in both Britain and America, never achieved the popularity and status his work deserves.

Almost a Golden Age writer, Bellairs’ stories offer straightforward police procedural investigations which will appeal to all fans of the classic British detective. He’s often referred to as the English Simenon for his main protagonist’s similarity to the methods and nature of Inspector Maigret, the books combine crime with procedure, leavened with humour, intelligence and compassion and set in small British communities. His long-running Scotland Yard detective Thomas Littlejohn – this is the 35th in the series and published in 1961 – now a Superintendent, is in Cambridgeshire clearing up a fraud case when a body is found in a swollen river. The man has been stabbed.

Local police, hard-pressed by flooding in the area – this is an era when constabulary forces frequently called on the Yard for help in murder cases – ask him to investigate. The dead man is Jim Lane, a popular showman at fairgrounds across the south of England. No one has a bad word to say about him. He’s a decent, hard-working chap, with no enemies, and most people are surprised anybody should want to kill him.

But as Littlejohn, backed by his lugubrious Sergeant Robert Cromwell, soon discover, Lane is not who he appeared. The victim is in fact Jim Teasdale, an inoffensive, but unsuccessful shop owner, artist and photographer from the Yorkshire town of Basilden. Outstanding forensic work leads the detectives north to where the murder must have been committed.

Gradually they untangle Teasdale/Lane’s complicated double life and meet his snobbish, social-climbing relatives. He was denigrated by his wife and daughters and dogged by ill-luck in business, and his father-in-law had branded him a ‘no-good bum’. The family have not a word of sympathy for the murdered man, taking the attitude that his death might have been engineered specially to spite them.

Teasdale had fled the torture of life in Basilden and found contentment with another woman and respite from his creditors and his extravagant family – all the while continuing to support them through his showground existence.

This is a fairly standard murder mystery of a rather nice man living a dual life, happy as a carnival stall holder during the week and dour and depressed at weekends by a horrid wife, snobbish daughters and a controlling father-in-law, anxious at all costs to avoid scandal and sensation in their middle-class pomposity with its focus on keeping up appearances.

Littlejohn is the senior man – bluff, but surprisingly compassionate. His younger sergeant is shrewd, occasionally ‘blokey’, but always polite and charming around the ladies.

Bellairs' books have strong plots and are full of scandal and intrigue with each character having a particular trait exaggerated to the point of caricature. This, perhaps, is not the best of the Littlejohn series, but even decades later is as witty and suspenseful as most. His gift for imagery, characterisation and his sometimes mocking wit will keep you reading to the end of what is a high-class procedural from a very different time.