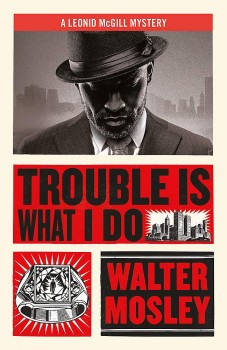 Trouble Is What I Do

New York-based PI Leonid McGill accepts a job delivering a document to a woman establishing her black ancestry, something her corrupt father is unwilling to accept.

This is the ninth outing for PI Leonid McGill, in a case that gets straight to the heart of the prejudice facing people of colour, like McGill himself. He is asked to deliver a document to Justine Sternman, an heiress approaching marriage, which reveals that her grandfather, ‘Catfish’ Worry, is black.

The complication arises from the fact that Justine’s father Charles is a white supremacist and a bigot, who has already assaulted Catfish when he revealed himself as Charles’ father. Such is his desire to keep the truth secret that he has hired Hilton Zeal, ‘the most dangerous criminal on the Eastern Seaboard’, to kill Catfish.

McGill feels morally obliged to take the case as the request is endorsed by a hitman, Ernie Eckles, who has offered McGill some consideration in the past. He makes arrangements to put Catfish and his son Lamont somewhere safe, while he tracks down the thugs who have a contract on his client’s life.

He also comes up with a plan to get close enough to Justine to deliver the document, written by her grandmother, which gives convincing detail about Charles Sternman’s conception. Justine is surrounded by protection so this calls for ingenuity, and there is also a question as to how Justine will react to the information. McGill has to stay on his toes to ensure the survival of his friends and his clients.

As usual, McGill is the embodiment of cool as he goes about his business, calling upon a variety of dubious characters to help with logistics. Without ever seeming to charge his clients he runs a huge office space and staff, has other premises available for special purposes and flashes the cash to guarantee the best service at his preferred restaurants.

McGill is well into middle-age so needs regular visits to the gym to retain the capability for physical force which he finds necessary, but these days he relies more on careful planning and an instinct bred from long experience, as well as his helpers like Twill, who he treats like a son.

A different view on what constitutes a crime means uneasy relations with the authorities, but McGill has firm views on moral responsibility. To quote Dylan: “To live outside the law, you must be honest.”

McGill can thus rub shoulders with some of the baddest men you can conceive, his family life is highly irregular, and the way he goes about things renders him liable to penalty. At the same time, he spends his energies righting wrongs and is as generous to the deserving as any PI can afford to be, a highly unusual man with an unconventional take on the society around him.