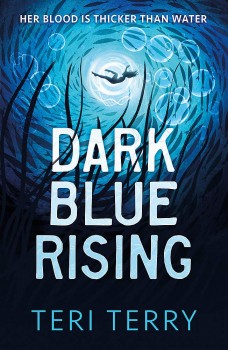 When an unexpected accident brings Tabby to the attention of the authorities for the first time in her life, she loses everything she’s ever known and has to face the unwanted truth that her whole life has been built on a lie.

Tabby has never known what it is to put down roots. All her life she’s moved around with her mother Cate, never stopping anywhere long, never having the time or the opportunity to make friends. That changes one day on a Cornish beach, and a boy called Jago tries to get to know her, but things take a bad turn when a group of boys start to bully Tabby. Doing her best to get away from them, Tabby makes a headlong dash across a road, is hit by a car and ends up in hospital.

Cate is desperate to get Tabby out of there as quickly as possible, before the authorities that they have spent so long avoiding catch up with them and suddenly they’re no longer just moving from place to place any more, they’re actually on the run, with the police looking for them.

Leaving the caravan near Boscastle behind, Cate heads for Manchester, trying to stay under the radar. But when Tabby makes a call to Jago from a public phonebox, their location is traced and the police finally catch up with Cate. Tabby finally learns the devastating truth of their transient lifestyle. Cate isn’t her biological mother. She was snatched by Cate as a young child from her parents.

Teri Terry has crafted another excellent young adult thriller and with Dark Blue Rising, is embarking again on another trilogy following her earlier successes. As with all her books, nothing is ever quite what it seems. I was thoroughly caught up in Tabby’s struggle to accept Cate’s actions and to come to terms with discovering she has two parents she knows nothing about.

The only thing that helps calm the whirling thoughts in Tabby’s mind is the call of the sea and losing herself in the water when she swims. The opportunity to join an exclusive summer swimming school brings new challenges and even new friends, but Tabby faces a growing certainly that there is more to things – and more to her – than anyone has told her.

Terry’s great strength is creating characters and then putting them into scenarios that stretch the imagination without ever forcing disbelief to be suspended by too perilous a thread. She expertly weaves elements of darkness into what at first seems a straightforward story of talented teenagers thrown together in a competitive environment.

With its backdrop of severe climate change, Dark Blue Rising presents a sharply contemporary scenario projected only a short way into a future that seems to be coming closer at frightening speed. The story moves at times at a deceptively relaxed pace, but when the shocks start coming, there’s no let-up, and there were several genuine heart in mouth moments that I absolutely did not see coming.