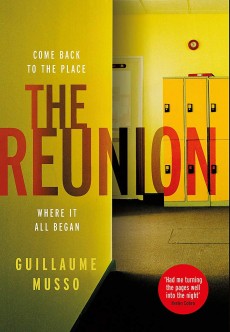 A reunion at a high-end college in the French Riviera threatens to uncover secrets that some former pupils had hoped were long buried.

The International School in Saint-Exupery is an upmarket establishment catering for the children of mostly rich expatriates in the glamourous French Riviera. As part of its 25th anniversary celebration, the school has gone all out to entice as many past pupils back as possible. Lavish new buildings are planned, and as part of this, the old gym block is scheduled for demolition immediately after the celebrations. The only problem with this is that the walls hide a secret from the past that will destroy several lives …

Thomas, a successful novelist whose parents used to work at the school, flies back from the States for the reunion, meeting up with his old friend Maxine for the first time since he left, as well as with Fanny, who now works in the local hospital. The three used to be inseparable, but then the disappearance of the school’s golden girl Vinca Rockwell in 1992 cast a shadow over their friendship, and now looks set to ruin their lives, as well.

It’s obvious very quickly that the demolition of the old gym will reveal something that Thomas desperately wants to keep hidden, and the most likely candidate for this is the body of Vinca Rockwell. But despite this, Guillaume Musso weaves a complex web, with new strands developing all the time, and it was hard to be sure what had happened in 1992, despite the frequent time shifts in the story.

The setting is redolent with the heat and glamour of the Riviera, where privilege jostles for place with criminality, all with the veneer of urbane class that the French can bring to most things. The characters were for the most part, reasonably likeable, and I enjoyed the gradually unfolding plot, but the main problem for me lay with the portrayal of Vinca Rockwell. I got the impression that the author expects the audience to love her as much as Thomas did, but to me she came over as shallow, irritating and self-obsessed, so Thomas’ adulation rather grated. But of that’s the impression Musso intended to give of her, then it was spot on!