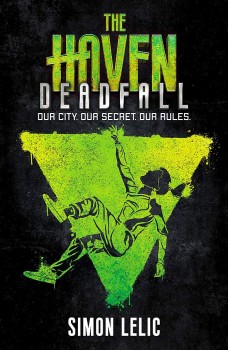 Lily is missing. Ollie and the rest of the Haven’s council vow to get her back, no matter what the cost.

The Haven, a sanctuary for homeless kids, has found a new home in the former Forest Mount school, but is under pressure. The youngsters have enemies who are determined to bring them down. Sebastian Crowe, the Home Secretary, has declared the Haven to be a terrorist organisation, and a raft of draconian measures are being brought in, including wide-ranging powers of arrest and detention.

The streets are now even more unsafe for kids, and Crowe’s new laws have turned many against them. Children are being snatched off the streets and no one knows where they are being taken or what is happening to them. The police now routinely carry guns and have been instructed to crack down ruthlessly on immigrants, who are also being rounded up in huge numbers and detained. The country is in the grip of a far-right government with Crowe widely seen as the power behind the throne of the prime minister.

When one of the members of the Haven’s inner Council is snatched by Crowe’s operatives, Ollie Turner must choose between trying to rescue his friend and staying safely under cover. For Ollie and his friends, the decision is a no-brainer. There’s no way they’ll leave one of their friends to the mercy of Crowe’s corrupt organisation.

For Lily, rescue can’t come soon enough, as she’s taken to a secret detention centre known as Deadfall, and subjected to a brutal, pitiless regime, presided over by the sadistic Warden Bricknell and enforced by countless equally heartless guards. Lily quickly falls foul of both the warden and the gang system in Deadfall. She needs to escape, but it’s a lot easier to get in the place than it is to get out.

Reading the third book in Simon Lelic’s excellent thriller series the week that Brexit finally became an inescapable reality provided a salutary warning of how a populist right wing government could – if it wanted – bring an end to the sort of freedoms that are now taken for granted. The climate of suspicion directed at anyone seen as non-native goes hand in hand with a demonstrable rise in hate-crimes against those targeted for vilification. The future is uncertain for anyone without the benefit of settled status here. It wasn’t much of a leap of the imagination for me from this to the wholesale detention of those deemed to be undesirable, which is the natural end result the book posits.

Like the strong-minded and physically capable Lily, Lelic doesn’t pull his punches. The scenes of violence and torture in Deadfall are hard-hitting and it’s hard to see any possibility of Lily gaining her freedom. But her Haven friends are resourceful and loyal. Ollie has no intention of letting her rot in the hell of a privatised detention facility. There’s a huge sense of inequality in the book and the kids of the Haven seem to have no chance of prevailing against a corrupt government with a home secretary who is in league with their arch enemy, the ruthless criminal, Maddy Sykes.

There’s nothing simplistic about the book. The narrative is strong and fast-paced, with successive shocks thrown at Ollie and his companions as they finally get close to Lily, but not in the way that any of them would want. If you have any tendency to view the current administration as anything less than an unmitigated disaster, perhaps The Haven: Deadfall might open your eyes to how much-vaunted safety measures can be abused, leading to a broken society where anyone on its fringes is demonised and oppressed.

This is a middle-grade age group thriller that will keep you on the edge of your seat, wondering how on earth Lily, Ollie and Co will ever get back to their secret home. This is not a series that promises happy ever after, but what it does promise is an action-filled adventure of the very best sort. And it succeeds in its aim.