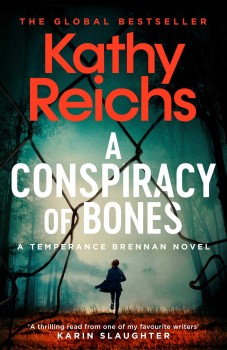 A Conspiracy of Bones

Forensic anthropologist Dr Tempe Brennan is drawn deep into the murky world of conspiracy theorists and child abusers as she tries to unravel the mystery of a faceless corpse.

Forensic anthropologist Temperance Brennan is back, and not having an easy time of things. She’s struggling with health issues in the shape of crippling migraines caused by an aneurysm; she’s coming to terms with the death of a friend and colleague; and, to top it all, she’s been sidelined from her consultancy work. Oh, and she’s also adjusting to a complex co-habiting relationship with former homicide detective Andrew Ryan. That lot would fill the baggage allowance of a long-haul flight.

When the dead body of a man, partly chewed by wild hogs, is discovered, Tempe hopes to get involved in the case, but Dr Margot Heaver, a woman with old scores to settle with Tempe, is determined to keep her out in the cold and refuses to call on her for help. The faceless man intrigues Tempe and she does her best to get in on the act, even if only from a distance, helped by her old partner in crime from when he was still in the police service, Erskine ‘Skinny’ Slidell, now in partnership with Ryan as a PI.

The dead man leads Tempe and Slidell down a dangerous path and involves them in the murky world of conspiracy theorists, labelled by Slidell as total nutjobs. Then they are taken deep into the squalid and evil world of child abusers. At times it’s hard to keep the various threads straight, but this is helped by Kathy Reichs’ useful habit of including mini plot-based info dumps that recap what’s been going on for the benefit of the ranks of the terminally confused, in which category I definitely included myself.

Reichs’ own background as a forensic anthropologist has always lent a considerable weight of authenticity to the series. Normally I run a mile from characters painstakingly talking about the plot to each other, but much of the attraction of these books comes from the feeling of learning something under the pleasant guise of crime fiction.

Among the various conspiracy theories that get an airing is the Philadelphia Experiment, alleged to have been carried out by the military on a naval vessel with so-called cloaking technology to render it invisible. Tempe’s tentative ventures into the dark web are equally fascinating, and there’s some much-needed light relief in the fact that it’s her mother who acts as her hacking spirit guide, in between planning her wedding and fussing over her daughter.

Over the course of 19 books, Reichs has developed a habit of writing in very short, staccato sentences, often without the benefit of verbs and at times I found this intensely grating as I had to consciously stifle my unfulfilled desire for a full sentence. The style undoubtedly helps to drive the pace onwards, which is clearly useful in the context of a long and quite technical book, and it wasn’t enough to totally bounce me out of the story.

One thing remains a constant through the books and that’s the fact that Birdie the cat ends up in almost as much mortal peril as her owner. Several books ago, one of our reviewers put in a heartfelt plea to Reichs to stop threatening the cat, but I’m afraid I have to report that despite re-tweets from the author herself, this message hasn’t been taken on board!

A Conspiracy of Bones is another fascinating journey into a world that most of us thankfully have little first-hand experience of, and Reichs is a well-qualified guide who sets up complex plots and then proceeds to unravel them at length. It was rather like coming together with a tangled skein of wool and then settling down until the last knot was vanquished.