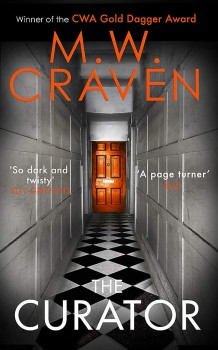 When a woman opens her a Secret Santa present in the office, she’s not expecting a couple of severed fingers to fall out of a mug. And neither was anyone expecting more severed fingers to turn up in the font of a Cumbrian church, or another two to appear on a meat counter in a food hall in Whitehaven.

As a serial killer appears to be operating in the area, the Serious Crime Analysis Section, a division of the National Crime Agency, is called in as this falls within their remit. DI Stephanie Flynn, DS Washington Poe and civilian analyst Tilly Bradshaw are dispatched to start an investigation.

Each crime scene contains a cryptic message left by the killer: #BSC6. Even the brilliant Bradshaw is stumped by that one, but despite that, the team work hard to find any connections between the three but to start with all they find is differences. The victims are two women and a man, anaesthetic seems to have been used on the women but not on the man. A breakthrough is slow in coming, but when they do finally latch onto a suspect, all they get is more contradictions.

A further surprise comes from an FBI agent obsessed by a contract killer known as the Curator.

Despite not having a high tolerance for serial killers or characters with quirky names, DS Washington Poe won me over in his two previous outings, The Puppet Show and Black Summer. I liked the strong sense of place, with the bleak but beautiful Shap Fell providing a fitting backdrop for Poe’s isolated cottage. I also liked the spark between Poe and Bradshaw and the unlikely friendship that grows up between the two. Poe’s long-suffering boss DI Flynn is another likeable and well-drawn character.

In The Curator, Flynn is heavily pregnant, but determined to keep working. She’s spectacularly grumpy at times, but it’s water off a duck’s back where Poe and the socially awkward Bradshaw are concerned. Craven sets up a good dynamic between the three, with genuine liking, respect and loyalty cementing the relationship between the three. I enjoy the fact that he doesn’t rely on internal antagonism to create the tension and even when one of the local coppers makes a bad first impression, that turns around relatively quickly, despite Bradshaw’s literal-minded total lack of tact.

As the investigation gathers pace towards a genuinely nail-biting finale, I was intrigued as there still seemed more of the book left than even a lengthy reveal would account for, and that’s when the twists started to come thick and fast. As usual, Poe follows his instincts and goes out on a limb without back-up, and there is some very tense action on the tide-swept sands of Morecombe Bay and its bleak, lonely islands.