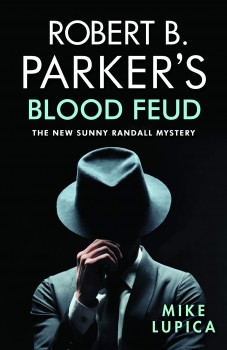 Sunny Randall’s relationship with her ex Richie is on again, so when he gets shot you know she is going to do something about it.

Some authors just seem to have a knack of creating characters that others are inclined to perpetuate, and Robert B Parker must rank as high as anyone in this with the possible exception of Conan Doyle and Ian Fleming. Ace Atkins has extended the life of Spenser, and at least two authors have added to the list of Jesse Stone stories. Mike Lupica has now been authorised by Parker’s estate to continue the Sunny Randall mysteries.

For those who have not met Sunny before, she is one beautiful but feisty woman, an ex-cop Boston PI whose consistent companions are a miniature English bull terrier called Rosie, and Spike, a tough gay restaurateur. She has recently resumed a relationship with her ex, Richie Burke, whose father Desmond and uncle Felix, are Irish mobsters.

As with Parker’s other heroes, Sunny and her companions are masters of the smart remark. Conversations are larded with jokes pinched from old Hollywood films, sandwiched into snappy patter and wisecracks. Use of a word of more than two syllables is inevitably followed by jokes about intellectual pretence so the dialogue is pitched at no greatly elevated level, but it suffices to amuse.

Randall is propelled into action when Richie is shot, although not fatally, his assailant averring to ‘sins of the father’. She immediately calls in favours to arrange sit-downs with the major mob guys in town to get some clues, without success. A succession of further shootings and an assault on Sunny herself follow, and it is clear Desmond Burke is the ultimate target. The reason may be connected with the Burke family’s rumoured importation of guns in quantity, but the attacks have a very personal feel.

In truth, enough is suggested early on to give a pretty big hint at the correct solution, but Sunny has to do a fair amount of sleuthing, dodging bullets and facing up to the mob to assemble all the facts, fending off the Burkes and the other mobsters along the way.

If you enjoyed Parker’s Sunny Randall stories I imagine you will enjoy this. There are nods to Parker’s other creations: Sunny occasionally remembers her one-time thing with Jesse Stone; she still works with Vinnie Morris, friend of Spenser, and goes for counselling with Dr Susan Silverman, Spenser’s main squeeze if I recall correctly. You may also like the Boston landmarks and the references to the Red Sox, if they mean anything to you.