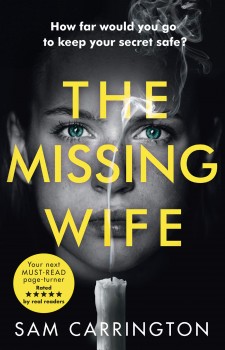 Sleep-deprived new mother Louisa can trust no one – not her husband, nor her best friend, and certainly not her ex.

Louisa, a sleep-deprived new mother approaching her 40th birthday, would happily forget her birthday. She just desperately wants Brian, her husband, to help a bit more so she can get a decent night’s sleep.

But Brian has other ideas. He and her best friend Tiff organise a surprise party, inviting the entire list of Louisa’s Facebook friends. Louisa finds herself in a room full of acquaintances and people she hasn’t spoken to in years. Some there she never expected or wanted to see again, including her ex-boyfriend, Oliver Dunmore.

Louisa drinks too much and hardly remembers the evening. So, when Oliver’s wife goes missing after the party, she cannot be sure that her intermittent flashes of memory have nothing to do with a horrific crime that implicates her. Everyone remembers the party in the pub in the south west of England differently. But surely someone knows what happened to Melissa. Louisa, for her fragile hold on sanity, is determined to find out. But the truth could be closer, and the deception more devastating, than she’d ever imagined …
I feel like I have read this book multiple times already. It’s another novel in the psychological thriller genre that involves new mothers struggling to keep their sanity after giving birth. Postpartum depression is a real thing, but the overuse and overdone parodying of new mums in a dark place is more than a little insensitive to the real-life mothers experiencing it.
I could not empathise let alone root for the whining Louisa, and the convenient dissociative amnesia burst the bubble surrounding my suspension of disbelief. Although I appreciate that half the time she was out of it through fatigue, the other half she was unaware of what was happening because she was drunk. I had zero sympathy. No wonder she was barely semi-functional. But I had an even bigger problem with this protagonist; her behaviour and introspections, particularly regarding Oliver, are inconsistent, hypocritical, and pathetically more redolent of a teenager than a 40-year old mum.
None of the few characters are likeable. Brian is underhand yet unbelievably blind to what is happening in his house, busy playing mind games that neither evolve nor get resolved. His actions and reactions to Oliver are incredible in the critical and truest sense of the word. Louisa’s beautiful and bubbly best friend Tiff is so shallow and stereotyped that her character barely breathes, let alone leaps from the page. But when she does act, she is clearly stuck in a time-warp and behaves as if she is still in the primary school playground.
An old college boyfriend, a dark secret from the past that now threatens the present, a missing person, alcohol, sleep deprivation, all that plus an unreliable narrator … It is as if the author has set out to tick the boxes required for a psychological thriller. Unfortunately, it results in a plot that feels hackneyed and rather contrived.
The Missing Wife fails to fulfil a promise, not only because the bad guy in this book is far too clear from the beginning, despite the army of red herrings, but also the story seems unfinished. The writing is lazy and generic, as is the dialogue. And the whole feels as if it needs editing to tighten the pace and tie up the plethora of loose ends.
It is an easy but unbalanced read, but often slow because of Louisa’s incessant whining and moaning. That said, some sections happen too fast and superficially, including the absurd, implausible and unforgivable ending.