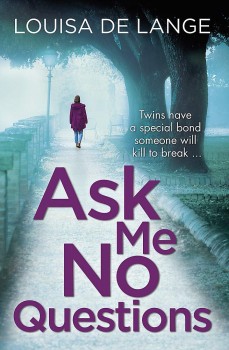 Ask Me No Questions

Kate Munro is convinced it was more than a random attack that put a woman in a coma – and even more so when she finds out who the victim is.

Fifteen years ago, identical twins Gabi and Thea, and their friend Harry, were at home when the twins' parents were murdered. Harry's father was convicted of the killings, despite the gun never being found, and will end his days in prison.

Today, Kate Munro is leading the investigation into the brutal attack on Gabi Patterson, who was found with severe head injuries on Southampton Common. One of her prime suspects is Thea, even though Thea says she was unaware her sister had been attacked. What is more, the twin alleges she has not seen or spoken to her sister in 15 years.

Kate becomes increasingly convinced that the attack was personal, particularly when she finds out about the vicious attack that had happened to Gabriella and Thea’s family. But first she has to disentangle the facts, which for now are entwined in lies, half-truths and at least one person’s determination to misdirect.

Ask Me No Questions is the first in the DS Kate Munro series by the relatively new kid on the block, Louisa de Lange. As one would expect in a police procedural, nothing is as it seems. It has more than its share of secrets, lies and deception, perhaps too many. Rather than teasing, the secrets muddy the water and feel as if they are foreshadowing a reveal filled with excuses instead of the perpetrator having a solid and convincing motive.  Sadly, this is the case, and the ending is without climax.

Kate is a DS leading an investigation, yet she makes stupid errors of judgment and behaves like a newly knitted rooky. Her behaviour would normally have someone in her position hauled up before her superiors. Rather than her being endearingly flawed and easy to invest in, I was imply annoyed by her crass stupidity and wondered how on earth she made it off the starting block.

My problems with Gabi and Thea start with a slightly misleading hook-line on the cover. We know that twins are supposed to have a special connection, particularly identical twins. But their story would have been far more convincing if they had been portrayed as ordinary sisters who resembled one another.  It is interesting that their personalities are distinct – Gabi, popular and gregarious, Thea, introverted and living in the shadow of her sister, without significant male or female attention. But this yin-yang has been blown out of all proportion.

The girls’ rationalisation for their actions, past and present, did not change my negative opinion. And Harry is little better. Despite the three witnessing a violent event in their teens, which could twist their morals, it feels like an excuse and not a reason.

The writing is good with believable dialogue and a sensible amount of description. However, there is too much tell, which distanced me when I was already struggling to immerse myself in a story with unappealing characters.

Perhaps the author felt the necessity to make Kate stand out of the crowd through her actions and reactions. Unfortunately, she is just another cop with baggage, and not the brightest one in the pack. But as de Lange’s writing is easy to read and there was enough flesh in this story, I am happy to meet this DC again to see if she gets her act together.