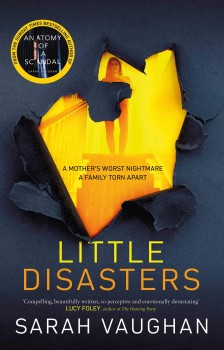 Liz and Jess’s friendship is about to crumble as the truth about Liz’s daughter’s head injury unfolds.

Liz may be the senior paediatric registrar in a hospital with a west London postcode, but even she wouldn’t want to visit its A&E department on a Friday night. Tonight, she has no option, because she has been called to check out a baby suffering from a head injury.
Surprise turns to worry and increasing suspicion, when not only does she realise the child is the daughter of Jess, one of her closest friends, but also that the story surrounding Betsey’s head injury is inconsistent and foggy at best. At worst, her fractured skull was no accident.
Jess has been finding it hard to cope. Her sons, Frankie and Kit never challenged her parenting skills like Betsey has for the past ten months. She is not a happy baby, constantly crying, or so it seems, and Jess cannot console her. Neither can she rid herself of the feeling that something terrible will happen to the child she wants so desperately to love but can’t connect with.
Within hours of Betsey being admitted into the hospital, something terrible does happen. But it is not what Jess expects. And she certainly never expected it to come from her friend, Liz.
This novel hops with each chapter through multiple points of view, Liz’s in the first person, the others in the third. Chapters that reach back in time are in the past tense, the rest in the present. The changes of tense should make the time-travel easy, but there is a lack of clarity. The same applies to the various voices, as there is a lack of distinction, and the adult dialogue is almost generic. That said, the children’s voices carry authenticity, as does much of their behaviour.
I would classify this story as more a drama, less a mystery, and definitely a perceptive and at times poignant book about motherhood with a side-order of the dark side of early childhood. It opens that taboo subject of post-partum depression and how it affects mothers, and not just first-time ones. There is a strong sense that being a good parent may not come naturally. And it reminds the reader that some cannot inherit the skill from their parents, because they have no point of reference.
Jess’s introspections are intense and believable, but I would have connected with her better had her voice been written in the first person. Liz is reasonably developed in her role as paediatrician. However, I felt her backstory is irrelevant. It does nothing for the main plot. Quite the opposite – it detracts from the already sparse suspense aspect and slows the pacing without rounding her character. It is as if the author has homed in on the theme of mothers and post-partum depression and is determined to throw it in at every opportunity. Less would have been more. The other characters lack solidity.
The writing style is easy, and the story at its heart is good, if a little spoon-fed and wrapped up with bows at the end. Unfortunately, it sags in the middle, and even though the end picks up a little, the twist is neither knotty nor convincing enough to make up for the long-winded reveal just before. This is an enjoyable and a fast read, but is in need of shedding 70 pages of padding.