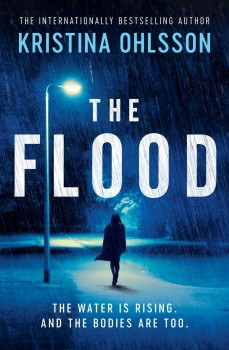 A man who’s wearing his daughter’s wedding ring is found dead in front of his fireplace. A funeral director frantically searches for his brother who doesn’t seem to be missing. A woman struggles to protect her family as her husband becomes more dangerous. The three cases baffle investigative analyst Fredrika Bergman and DCI Alex Recht.

The Flood is a novel that brings together for the sixth time the intellectual and intuitive duo who are working on a series of complicated but seemingly separate cases. The investigative analyst Fredrika Bergman and the DCI Alex Recht trawl through questions, work-related queries, their boss’ power games and their own emotions.
Their relationship, both as friends and in professional capacity, is extremely well portrayed, full of nuance, and mutual understating and respect, adding so much depth to the whole story. As they battle with uncomfortable or painful events, they also come to the realisation that Spencer, who’s Frederika’s husband and love of her life, might have somehow been involved in the cases.
It all seems very confusing and unsettling, especially as the core team of police officers tries to cope with unclear leadership and some unfinished business. But bear with The Flood. There’s method in this madness of unconnected crimes.
Malcolm Benke was found in his own home, sitting in a chair in front of the fireplace, a substantial bullet hole in his chest. The man, a successful property developer, was wearing his daughter Beate’s wedding ring. This discovery baffles the investigators especially as Beate was a victim of domestic abuse – and has also been dead for a while.
Funeral director Noah Johansson searches desperately for his brother Dan, a man who doesn’t seem to be missing. Dan and his family have planned to move to Australia for a year and everything points to the fact that they have left the country. But Noah, convinced that something terrible has happened, tries in vain to reach to the police and finally contacts Alex.
A woman struggles to protect her young children and her life as her husband loses his grip on reality and turns ever more dangerous. She cannot escape from the bulletproof locked house and doesn’t understand why someone would want her to be imprisoned like that.

With no forensic evidence, no fingerprints, DNA nor any witnesses, initially Fredrika and Alex believe that these cases are totally unrelated – until they uncover a connection between these three people that changes everything. Soon they are pulled into an escalating series of events where the past seriously collides with the present and haunts all those involved. On top of this, someone keeps leaving cryptic messages addressed to Alex, taunting him with references to some obscure book.
The Flood has intricate plotting and an exquisite build-up of the tension that threatens to tear apart the lives of all the characters. And there’s a superb translation by Marlaine Delargy, who carries the Swedish atmospheric writing of Kristina Ohlsson across the language barriers.
The author’s style appears understated and unassuming, gently navigating personal issues of all the main characters, yet has huge impact, leaving readers gasping for breath when it delivers powerful terrifying truths or descriptive passages, bursting with menace.  As the narration flows along a convoluted route of old sins and reckless decisions, it eventually arrives at the point where the main pair have to face their own private demons. The heart-breaking but magnificent finale is unforgettable.