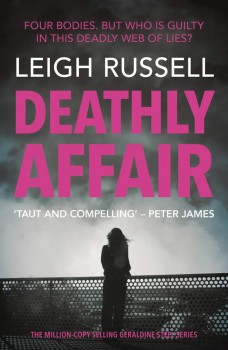 Detective Sergeant Geraldine Steel must discover what links the deaths of vulnerable men to uncover a vicious killer.

Has the Geraldine Steel series run its course? This 13th outing for the conflicted detective sergeant adds nothing new, repeating her continuing problems with her real and adoptive sisters, her inability to clarify her relationship with her former Sergeant, now her DI, Ian Peterson and her often repeatedly pious view of her work, which is increasingly artificial and grating.

Steel is an experienced and successful detective, often brilliant in her deductive processes. But why is this clever, dogged woman allowed to spend so much time showing her vulnerability, self-doubt and her internal battle? The book plots, while still imaginative, are beginning since her demotion and move from the Met to York, to become formatted and frankly, too improbable.

It’s difficult to imagine the beautiful northern city as home to a glut of serial killers – and even the none-too-successful or efficient North Yorkshire force cannot be possessed of senior officers so stupid that they could countenance charging three totally separate individuals with the same murder in a matter of just a few days!

When a homeless man is found strangled, Steel is caught off-guard both by the cold-blooded nature of the crime and her colleagues’ scepticism and lack of interest in a victim they consider merely a tramp. An identical second murder of a similarly vulnerable man suggests the existence of a killer whose motive is as elusive as he is dangerous. In Russell’s usual style, readers are given an early insight into the killer’s motivation, but spared too graphic a description of the actual deaths, leaving us to imagine the details.

Steel is forced down unexpected avenues into the lives of three people caught in a web of love and deceit, as she discovers there is more to this case than any of them could have imagined. Her demotion helps the story. Without the pressures of a senior investigating officer, she can now apply her focus and relentlessness to the case. And her conciliatory strategy for challenging her superiors when she feels they are acting precipitously on flimsy circumstantial evidence is as practical as it is clever.

Any of the series can be read as a standalone, as Russell offers enough snippets of background so no reader is left in the dark. Whatever her failings, she has again created a story full of tension, misdirection and mystery, designed to play on the reader’s emotions, blended with drama and humour.

Serious students will spot the gaps in the police work and once again question Steel’s ability to find herself in situations she cannot hope to control, but somehow emerge as the one who puts the pieces together.