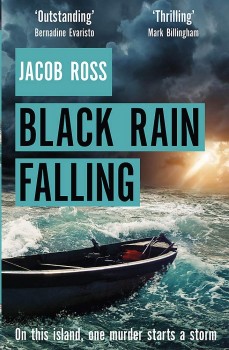 On the Caribbean Island of Camaho, young detective Michael ‘Digger’ Digson fights against local thugs and the indifference of the local establishment.

The Caribbean Island of Camaho has little to offer by way of economic resources: fishing for what the foreign factory ships have left and subsistence agriculture for the most part. Its location does, however, offer opportunities for the movement of narcotics from South America to the US or onwards to Europe, with money and violence an inevitable corollary.

The police on the island are known more for using their powers for their own benefit rather than protection of the public. An exception is the small group recruited by DS Chilman, retired but still in action, who recruited promising officers from amongst those he had apprehended for minor offences and trained them in the right way of thinking.

Michael ‘Digger’ Digson, the protagonist, is one of these recruits. He’s from a broken home, and still nurses resentments, but has great drive, sharpened by overseas forensics training. With his work partner Miss Stanislaus, who is unrivalled in deduction, the pair make a formidable fighting force.

When Miss Stanislaus kills a man in self-defence there are accusations that this was a planned retribution for past injuries. Digger manages to secure a delay before an inquiry is held, giving time for him to show that the dead man was culpable for many crimes. The ‘necktie’ killing of another local looks to be related and linked to some vicious visitors new to the island. Unravelling these matters is the only way Digger can engineer a solution to the threats against his partner and himself.

The inhabitants of the island are a racial mixture of ex-slaves, Indian indentured labourers and colonial adventurers, with a dialect all their own but resembling that of Grenada, the birthplace of the author. The speech patterns add greatly to the feeling of place; Digger is able to talk either the local patois or the Queen’s English, whichever is most useful for his purpose. He is, however, always respectful of the beliefs of his neighbours and sympathetic to their concerns.

In contrast, Digger’s feelings towards the minority who keep a tight hold on the wealth and power – such as it is – within Camaho are distinctly antagonistic. He treats his father, the Commissioner, with disdain, and regards the Minister of Justice as a crook.

The corruption endemic in the authorities and the laissez-faire this gives to a few larger-than-life bullies and thugs means someone as dedicated as Digger will always be under threat, generating plenty of opportunities for him to show that he has the right stuff. The author has created a convincing world, full of beauty and challenge, with a small band of flawed heroes prepared to fight to protect their home.