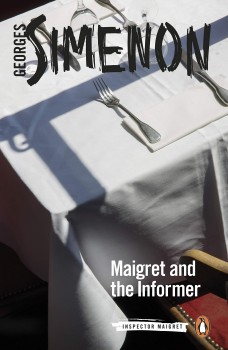 Maigret and the Informer

The body of a restaurateur is dumped on a Paris street and an informer points the finger. Maigret exercises his skills to get the evidence needed.

Maigret gets a late-night call when the body of ‘Monsieur Maurice’ Marcia, owner of La Sardine restaurant, is found dumped in Montmartre. When he calls at Marcia’s home, he finds the man’s young wife, Line, who takes the news very coolly.

Marcia had a brush with trouble in his youth but as the owner of a successful restaurant it is surprising that he should have suffered such a violent fate. However, things become clearer when Inspector Louis, who knows Pigalle like the back of his hand, gets in touch about calls he has been getting from an informer.

Maigret quickly identifies the caller, nicknamed the Flea, a small man who hangs around criminals picking up useful information and passing this on. The Flea is in hiding from the Mori brothers, suspected of multiple robberies, who he accuses of the murder. He claims Manuel Mori and Line had long been lovers, although Monsieur Maurice was the last to know.

So Maigret takes the matter into his own hands, pressing the Mori brothers and Marcia’s widow for answers and even flying south to Bandol for the funeral to keep up the pressure. Eventually he gets enough evidence which gives him an excuse to make an arrest, but he will need to use his wits to divert the steady stream of denials he has been receiving.

Maigret is now in his mid-50s, with a national reputation, so his close involvement with the case may be considered surprising, but I suppose a detective chief inspector can be indulged from time to time. Certainly Maigret feels at home: he understands that the wealth and insouciance of his quarry are only skin-deep, a thin facade concealing a species of low-life with which he is entirely familiar.

His comprehension extends to Inspector Louis, a policeman who, after a tragedy at home, spends all his time in his patch absorbing the life of the people around him, an irreplaceable resource. Louis is generally regarded as odd because of his solitary nature, but Maigret shows appreciation for his special qualities.

Maigret’s motto of ‘understand and judge not’, which he shares with Simenon himself, is not so evident in this episode; the detective is relentless in his determination to expose the killers. As usual, however, he moves with characteristic confidence and you get the feeling that his prey never really stand a chance against a man who so easily brushes aside their attempts to conceal the truth.