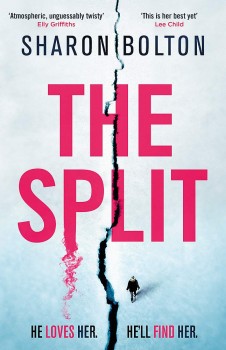 South Georgia is the dream posting for glacier expert Felicity Lloyd, but dreams have a nasty habit of coming at a price.

Felicity Lloyd is determined to go on a research trip to the remote island of South Georgia, famous for its involvement in the Falklands War, and for penguins and glaciers. Felicity is fairly indifferent to penguins, but quite likes them. She really, really likes glaciers, and as for conflict, she’s had enough of that in her life, thank you very much. She’s wanted to be there for so long and now it’s become real, but what she doesn’t expect is a man from her past to appear on the island and start a relentless pursuit. That definitely wasn’t in the plan.

The first part of The Split alternates between the narratives of Felicity, Freddie and Bamber. They all have their own distinct views of the world. Felicity wants to get away from Freddie. Freddie wants to find Felicity and explain things to her. Bamber is a little more confusing to start with: she knows a lot about the old whaling station on the island, she’s a tough cookie, especially with a knife in her hand, but her place in the story isn’t clear.

Then Sharon Bolton throws in a time-shift and I didn’t even have time to back off, muttering darkly as I usually do when that happens. I was pitched straight into another narrative, one in which secrets abound and maybe no one is what they seem. Or maybe they are.

I’ve liked Bolton’s work from the beginning, when she was styled SJ Bolton, before reaching the stage that she – or her publishers – were comfortable coming out from behind the illusion that initials make the book more saleable to men and women alike. And maybe that’s true, I don’t know, in the same way as I didn’t know in The Split who was telling the truth.

What I do know, though, is that Bolton has pulled off a very difficult trick in this book, one that seems to have happened a few times recently with other authors too, so maybe the seemingly relentless tide of irritating protagonists is slowly turning. I ended up caring about all the characters, even when I didn’t understand them or particularly like them. They’re all distinct, with their own voices, their own thoughts and their own fears. Sounds simple? It’s not. And the more the book developed, the more the characters gelled in my mind and I could tell them apart, so when the pace really picks up, the narrative was as bleak as the starkly beautiful glaciers and as deadly for the unwary. I was seriously impressed, and I can be difficult to impress.