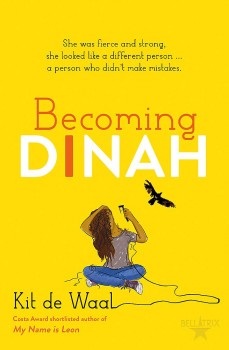 When her neighbour’s campervan containing his prosthetic leg is stolen, 17-year-old Dinah agrees to join forces with the distraught Ahab to track it down.

Seventeen-year-old Dinah has had an unconventional upbringing in a commune in the north-east of England. Dinah’s best friend is Jonah, a boy a few years older than her who lives at the nearby farm. Their parents are friends as well as being connected through the commune, but when Dinah’s dad and Jonah’s mum fall in love, the reaction of Jonah’s dad, Ahab, threatens the future of the commune, as well as tearing Dinah’s world apart.

Dinah’s story is told in a series of flashbacks as she sets out on a roadtrip with Ahab to recover a stolen campervan containing Ahab’s prosthetic leg. And she is driving, despite not holding a driving licence. Dinah, who had been intending to take advantage of her mother’s absence on a retreat to leave home, has cut off her long black hair, determined to reinvent herself and start a new life, so having to act as a driver for the irascible and increasingly erratic Ahab on his quest isn’t the sort of escape she had in mind, but the money Ahab has offered her was too good an opportunity to turn down. So, calling herself Ishmael now, she does her best to drive Ahab’s not quite fully renovated VW camper in search of his stolen van.

Becoming Dinah is a story about loss, love and obsession, wrapped up in a modern take on Herman Melville’s classic story, Moby Dick. It’s an odd choice, as few readers today are likely be familiar with the original, beyond its famous opening line, but even divorced from that, Becoming Dinah is well worth reading. Chapters headed ‘Dinah’ tell the story of how Dinah reached the point of leaving home, whereas those labelled ‘Ishmael’ focus on her experiences on the road with Ahab. He’s a hard taskmaster, as driven and goal-obsessed as his namesake, with a white campervan replacing the unattainable leviathan of Melville’s classic tale.

The book also depicts Dinah’s struggle to come to terms with her own obsession with schoolfriend Queenie and her attraction to her as more than just a friend. Dinah – or Ismael, as she prefers – is mortified by the feeling that she has lost Queenie’s friendship by crossing a line between them and she’s determined to get as far away as she can from the source of her embarrassment. Kit de Waal’s depiction of Dinah’s thoughts and feelings is powerful, as is the story of Dinah’s life and how it was thrown into turmoil by the breakup of her parents’ marriage.

This is an emotionally complex story that perfectly captures the turmoil of anyone who feels they’ve never fitted into the neat pigeon-holes the world around them seems to prefer.