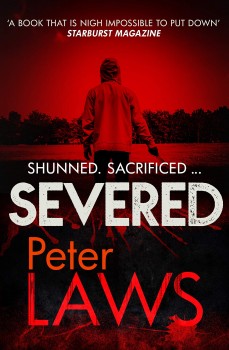 When a vicar is brutally attacked by his own son in a church service, atheist ex-minister Professor Matt Hunter is asked by the police to advise on whether the teenage boy was involved in devil worship.

Mining subsidence in 1886 led to the chancel of St Bart’s in the small village of Chervil sinking by six inches. Since then, it’s more commonly been known as The Crooked Church, and has become something of a local curiosity. Reverend David East has a small but enthusiastic congregation and this Sunday, he’s delighted to see his teenage son Micah return to church after a long absence. He used to be a regular attender, often praying with his father, but more recently, he’s been withdrawn and unwilling to say why he’s disengaged from the church.

Micah’s return doesn’t mean a return to his old closeness with his father. Instead, at the climax of the service, he attacks his father with an axe, doing his best to kill him as the congregation watches in horror. The boy flees the church and is immediately the subject of a police manhunt.

Detective Sergeant Jill Bowland is beset by claims from the shocked parishioners that Micah East is involved in devil worship. Not knowing whether there’s any truth in the rumours, she calls on former vicar, Professor Matt Hunter, who’s helped the police in two other investigations. She wants to know if there’s anything more sinister to the boy than just the usual teenage rebellion and a tendency to wear black. Hunter is happy to oblige, despite his wife’s reservations.

Severed has two separate but clearly converging storylines, the second of which involves a cult-like community holed up in an isolated farm, determined to avoid outsiders at all costs. They seem to revere Jesus but hate God, viewing him as a tyrant who murdered his only son.

For anyone who likes a good theological argument, the nature of the Trinity makes as good a place as any to start, but a nodding acquaintance with one of the central tenets of Christianity isn’t a necessary adjunct to the book. Peter Laws makes a good stab at explaining this to a layman, under the guise of Hunter talking in a pub to another character, but at the end of it I doubt anyone will be much the wiser. As the saying goes, it’s a mystery!

I quickly found I was skimming over the parts involving the cult. They were clearly all out of their collective tree and it was hard to empathise with any of them, but I suspect that’s the nature of cults. Unless you’re part of them, it’s hard to see the appeal, and for many, that’s true of religion as well.

Matt Hunter makes a reasonably interesting protagonist. He’s now put his own time as a church minister behind him and is a card-carrying atheist who’s even written a book on the subject. For all his background in the church, I didn’t find he had any great insights to offer, which is a shame, as I think there’s plenty of mileage in the central premise – it was just the execution I found lacking in lustre. The elements of horror, even in the explosive climax, were fairly routine, without the edge of otherworldly creepiness that Phil Rickman and James Oswald bring to the party. DS Bowland didn’t have much to offer, either, and the police elements were so low-key as to be almost non-existent.

Overall, Severed has fewer thrills than I’d hoped for, but if horror is what floats your boat, then this might well have some appeal, and if you end up being able to explain the Trinity, I’ll be impressed.