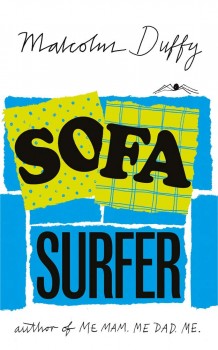 When 15-year-old Tyler meets a girl at the local lido, he’s only looking to make some money from giving her swimming lessons, but an unlikely friendship grows between them that threatens Tyler’s relationship with his own family.

Fifteen-year-old Tyler’s life is turned upside-down when his parents decide to move from London to the Yorkshire town of Ilkley. He hates the idea of moving, changing schools and leaving his friends behind and the reality is every bit as bad as the anticipation. He’s bored and angry, with nothing more to do than walk Dexter, the family dog, on the moors near the town.

Then a chance meeting with a girl at the lido changes things and gives him something to focus on. Spider, as she’s known, wants to learn to swim and Tyler is happy to teach her. The money will come in useful and it gives him something to do. The trouble is that Spider isn’t very reliable where money is concerned and soon ends up owing Tyler more than she’s been able to pay him.

The reason for Spider’s money troubles is laid bare the day her cousin turns up at the lido, accusing Spider of stealing from her and throwing her out of the flat where she’s been staying. Tyler learns that Spider has nowhere to live and has only been sofa surfing at her cousin’s, but now she’s lost even that things are about to become desperate. Sofa surfing is a term used for those who sleep on sofas or floors because they have no form of permanent accommodation.

This is the story of an unlikely friendship. Tyler’s life is poles apart from Spider’s. He might not like having had to move, but he still has a house to live in and a family who care about him. For Spider, life is very different, and the contrast between their lives throws Spider’s plight into sharp relief.

For thousands of youngsters, sofa surfing is a very real problem, as they move between family and friend, and those are the lucky ones. For countless others, a life on the streets is harsh and dangerous. Hostels are not always the safe havens they should be, and many young people like Spider prefer a solitary life in shop doorways or woods. Tyler’s attempts to help Spider bring him into conflict with his family, but he’s not prepared to abandon his friend.

Tyler, Spider and Tyler’s on-off not quite girlfriend Michelle are all well-drawn, utterly believable youngsters. Michelle comes over as rather self-obsessed, and she serves as a sharp contrast to the poverty of Spider’s life, as Tyler feels pulled in different directions between the two girls who both mean something to him, but when push comes to shove, it’s Spider he chooses.

Sofa Surfer shines an uncompromising light on the plight of homeless teenagers and the dangers faced by them on the streets. This is a book that will make you think about how far you would be prepared to help someone like Spider. And in today’s troubled times, the ending is particularly poignant and apt.