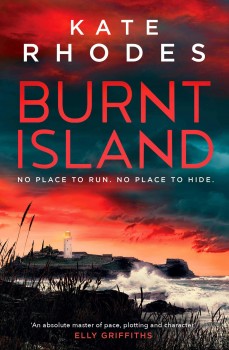 When a man is horrifically murdered on a remote island in the Scillies, DI Ben Kitto’s boss wants results fast, but even with a relatively small pool of suspects to draw on, the case isn’t an easy one to crack.

DI Ben Kitto, Deputy Chief of Police for the Scilly Isles, is back in another case to send a shiver down the spine of anyone working in the tourism industry on the islands. A man has been horrifically murdered by being doused in accelerants and set on fire, left on a hilltop on one of the small, remote islands of the Scillies.

The man is TV celebrity astronomer Alex Rogan who wanted to take advantage of the lack of light pollution on the islands and set up a Dark Skies Festival as well as building an observatory. As far as Kitto is able to ascertain, Rogan was popular, but it soon becomes clear that one person at least isn’t in favour of outsiders as a cryptic message in Cornish is found scratched on stone near the site of the murder.

With only a population of only 80 people on the small island of St Agnes, there’s only a small pool of people who could have committed the murder and as far as Kitto is concerned, everyone is a suspect, even the dead man’s distraught and heavily pregnant widow.

I first met DI Ben Kitto in his previous outing, Ruin Beach, and the latest is the third in the series. Kitto is a decent bloke thankfully free from most of the personality disorders that seem to afflict most crime fiction coppers. What marks him out is the fact that he’s returned to the islands where he was born and bred from working in the Met. His background gives him an insider’s knowledge of the islands and their inhabitants, but his time away also marks him as an outsider.

The books are told in the first person from Kitto’s point of view, interspersed with some short chapters in the third person from someone who is also an outsider in the community, Jimmy Curwen, known locally as the Birdman. He lives a solitary existence on the fringe of the community on St Agnes, roaming the islands by himself, watching and caring for his beloved birds, mainly subsisting on the charity of others.

The Birdman is the first person to find the victim’s still burning body and out of respect for the dead, he shrouds the murdered body in his coat before running away as fast as he can. The coat places him at the scene and bumps him high up Kitto’s list of persons of interest but it’s always clear that in fact the Birdman is harmless, as his actions are made clear at the outset, which makes it easy to sympathise with him as the misunderstood outsider. Other suspects are harder to get a handle on and as Kitto digs deeper, motives don’t get any clearer.

Kate Rhodes makes it easy to picture the somewhat desolate island steeped in both history and prehistory. A map helps fix the geography in mind ,making a handy point of reference as the story progresses. The islanders are an insular bunch and there’s definitely a Wicker Man vibe about the book that makes pointing a finger in any particular direction tricky. The murdered man’s father-in-law is one possible suspect as he’s estranged from his daughter by a chasm that even the murder fails to bridge. Another person of interest is a troubled teenager who’s been in trouble before for setting fire to a neighbour’s barn.

Kitto is a likeable sort who doesn’t lug too much baggage around with him, apart from the fact that his boss is always on his case to work faster and smarten up. The former complaints are unjustified and as for the latter, yes, possibly the haircut and shave are long overdue. He’s also accompanied most places by a large, hairy dog who seems to spend an inordinate amount of time being left to roam about by himself. I’m not quite sure what narrative purpose the dog serves unless it’s to put the wind up animal lovers and send me to take a sneak peek at the ending to make sure it’s safe to continue.

If you like books set in unusual locations with a good sense of place, then this series is one for you, and this provides a perfectly good starting place. So buy a ticket and hop on the next ferry heading for Burnt Island!