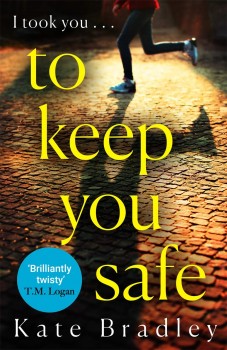 To Keep You Safe

Former soldier-turned-teacher Jenni Wales has to decide how far she will go to save one of her pupils when no one else appears to care that the girl is terrified and at risk of abduction.

When former soldier-turned-teacher Jenni Wales sees 15-year-old Destiny’s black eye, she’s immediately worried for the girl’s safety. Destiny is in care, which ramps Jenni’s concerns up a notch and then things go right off the scale when she sees a man attempt to abduct Destiny from school and she sees that he has a gun.

A social worker is summoned but totally fails to ally Jenni’s fears. The headteacher, George Danvers, does his best to convince Jenni to leave matters in the hands of the appropriate authorities, but although Jenni was used to following orders when she was in the army, that has also left her with a finely-honed sense of danger and the knowledge of when to act on her instincts.

The more Jenni thinks about what she saw, the less inclined she is to take matters at face value. Destiny is a smart kid and Jenni knows that she has good reason to be afraid. The gun is adequate proof of that. When Jenni sees Destiny leave school early, going over the fence rather than through the gate, she acts on her suspicions and bundles Destiny into her car rather than let the gunman’s next abduction attempt succeed. She has no clear idea how she’s going to keep the girl safe, but she knows she has to try, as no one apart from her seems to be taking the threat seriously.

All main characters in crime fiction seem to need their quirks, and in Jenni’s case she has a medical condition that means she’s unable to accurately read people’s facial expressions and body language and has nothing more on which to base her judgments than words and actions, which aren’t always enough.

On top of that it quickly becomes clear that Jenni is also suffering from a very hefty dollop of PTSD from her final tour of duty in the Middle East and has a serious guilt complex about having failed to keep someone in her squad safe, which seems to be the reason why she appears to go overboard in her need to keep Destiny safe.

The burning question, though, is how reliable a narrator Jenni is. It’s plain from the beginning that she sees the world in a very different way to others, but how different is something that only begins to emerge slowly. There are chapters from other points of view, including Destiny’s own version of events, but even then it’s hard to know what’s being kept back.

The narrator I had most sympathy for is beleaguered headteacher George Danvers, a man at the helm of a fast-sinking school. He’s under pressure from all sides and just doesn’t have the time to spend borrowing trouble, which is what he thinks Jenni is doing. George is caught up in events over which he seems to have little control, but he’s also a man who wants to do the right thing, even if he does end up putting his cherished career and retirement prospects on the line in the process.

Other chapters from the point of view of Aleksander, the man Jenni is trying to keep Destiny away from, make uncomfortable reading, but nowhere near as uncomfortable as the later chapters told by Destiny herself. It’s hard to say that I enjoyed reading To Keep You Safe, as I found none of the narrators – apart from George and Aleksander’s sidekick, Gary – particularly sympathetic, and I was constantly looking for the sting in various tails, some of which were a while coming. At first, it seemed like the book had peaked too early as matters come to a brutal climax some way before the end, but then gradually another chilling and unexpected reveal unfolds.

To Keep You Safe is an assured debut, but despite that, I still found the book both unsettling and at the same time somewhat unsatisfactory and I found it hard to shake off the sense of having been somehow cheated by the ending and by the large sense of injustice I was left with. I also found it hard to forgive what happened to Gary, but I suspect that was very much the point of what turned out to be the pivotal scene in the story. This isn’t a book that will leave anyone feeling happy, but it was compelling enough to drag me with it to the end.