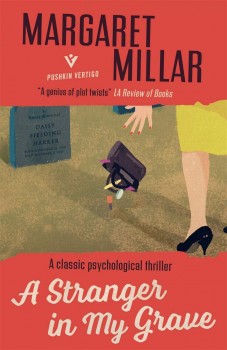 A Stranger in My Grave

Daisy Harker has everything: a beautiful home and a wealthy businessman husband who loves her. She also has a recurring nightmare – she sees her own grave and a date that means she has been dead for four years! On the edge of a breakdown, she hires an investigator.

Canadian/American Margaret Millar, an author of psychological mysteries and thrillers and a pioneer of feminist noir, isn’t well-known in Britain. At the height of her popularity in the 1960s, her cutting wit and devious plotting won her an Edgar Allan Poe award, and the Woman of The Year title from the Los Angeles Times. A Grand Masters for Lifetime Achievement from the Mystery Writers of America followed in 1983.

It’s not difficult to see why if this book is any indication. This clever psycho-drama is an excellent example of the mid-century mystery genre. This a subtle and eloquent examination of the emotional toll on people caused by the small things in their lives which create inner conflict or despair. It deals with the subtle distinctions between economic class, races, haves and have-nots. Nothing in the lives of her characters is simple, and often the most downtrodden get the most compassion, though never in an overt or obvious way.

Daisy Harker has the ideal middle-class life in the Californian town of San Felice, a fictionalized version of Millar’s own home in Santa Barbara. A beautiful home, a wealthy businessman husband who loves her, she is protected and doted upon. She also has a controlling mother – and a recurring nightmare in which she sees her own grave and a date that means she has been dead for four years! On the edge of a breakdown, she hires an investigator.

Her cast of characters have backgrounds ranging from the upper middle-class suburban whites to Mexican-Americans. All have various degrees of economic success or failure. At the heart of the story is Daisy, a classic late 50s, early 60s ‘Stepford Wife’, who gradually realises she has the ability to emerge as a strong, interesting woman. There is also a beleaguered bail bondsman/detective whose somewhat troubled personality grows on the reader.

There are vivid and unusual types throughout, especially among the Latina women, and Millar shows a real understanding of the problems of poverty, of excessive addiction to religion, of being trapped in false behaviour to maintain a marriage, the effects of racial discrimination, and of alcoholism. While her portrait of one alcoholic is central to the story, there are no real villains. Everyone is shown to be human, despite their flaws and how much effort the sustenance of their own humanity and dignity can cost them.

The story has an impressive degree of understanding and compassion, a compelling narrative and a rich, although limited, array of characters whose personal musings make for fascinating reading.

Introducing a Mexican PI as one of her main characters is several steps ahead of her time. But Stevens (Jesus) Pinata is anything but a typical private eye. Daisy hires Pinata to help her reconstruct her ‘death day’, and as this tale of family deception, inextricably tangled with race and frank explorations of alcoholism, sex, and religion, quickly progresses – the whole issue is settled in a few days – it gives a clear-eyed  assessment of the period and the constraints under which women lived.

It also has a straightforwardness, bordering on the blunt, about race relations. Today this is a subject to be tiptoed around, but Millar’s characters merely acknowledge such tensions as a fact of Californian life.

Millar is ripe for rediscovery, for her choice of subject, her blunt assessment of complex situations, as much as for her talent in weaving complex tapestries of mystery and secrets. This may be no great mystery to thoughtful and experienced readers, but it is a great story!

The book was written in 1960 and in this period Millar set out to highlight the limitations of the suburban housewife, what was expected of her, and what troubled her. Adhering to convention produces the darker parts of her writing, while much of its vividness features explorations of women attempting to transcend circumstances. It is a solid offering from this talented writer, strong, compelling, and eminently worth the reader’s time.