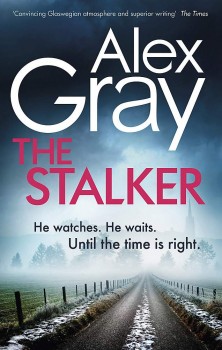 Superintendent William Lorimer and his Major Incident Team track a serial killer – but Lorimer’s own wife is in danger from a madman who targets a particular type of woman.

Her novels never concentrate totally on her protagonist, but always introduce lesser characters, nevertheless key to her plot and accurately reflect the various personalities and organs of law enforcement and their individual roles in bringing criminals to justice.

Gray has a fine eye for detail and immaculately researches her backgrounds. Her stories, while occasionally, but never gratuitously brutal, offer some of the best descriptions of police operations I’ve read – with every character, even those in the ‘walk-on’ roles, believable and playing their part to the full. It is this ability to bring her characters to life which lifts the stories far out of the ordinary. All are totally believable and intensely human.

Lorimer’s wife Maggie, a constant feature in the books, has always been the perfect long-suffering, loyal and supportive detective’s wife, now steps into a major role of her own – one she would never have chosen!

After years of writing, often quite secretively, her first children’s story featuring the friendly ghost of a little boy has taken the publishing world by storm and she has been offered a promotional tour of the country to promote sales. With her husband tied up in the case of a possible serial killer – the bodies of two young women, one the daughter of a High Court judge, have been discovered in Glasgow’s Bellahouston Park in quick succession – she is happy, and a little relieved to be away from a crime scene which is close to their home and will involve his total concentration.

As she tours the country with a publicist, she is faced with strangers at every book signing and promotional event. She never notices the quiet, non-descript man sitting in the back row. But he has noticed Maggie Lorimer. Soon his will be a face she never forgets.

This is a well-woven and superbly descriptive story – both places and people come to life through Gray’s excellent descriptions – and it’s excellent and nail biting until the very end. And in keeping with her policy of highlighting all aspects of police work, the fictional psychiatrist Solomon Brightman and the very real and eminent soil scientist Professor Lorna Dawson have key roles to play in the detection of the crime.

This is a super novel which will leave fans of realistic police stories impressed and eager for more. Gray has converted me into a fan of Superintendent Lorimer who, despite all the rules now hampering The Job, reminds me of several top detectives I met as a crime reporter and who I have always regarded as the best in British policing.