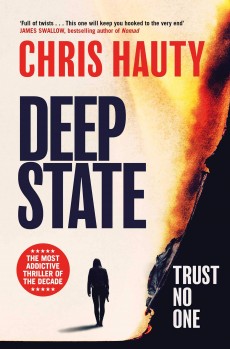 If this explosive debut novel had been published two years ago, much of its core content would by now be considered grimly prophetic – a populist, controversial, and divisive US President at the centre of an increasingly polarized Washington, with tense partisan drama and paranoia rampant as contentious political turf wars are fought out in Congress and Senate and behind the scenes within the administration itself.

Remind you of anything or anyone?

President Richard Monroe is a 30-year army veteran who rose to the rank of general before being forced to resign when a frank assessment of the sitting president was recorded by a reporter. His best-selling memoir which, in a nation always seeking heroes, was a huge hit, effectively launched his candidacy for the highest office. Installed in 1600 Pennsylvania Avenue, he begins to reverse the policies of 70-plus years, seeking rapprochement with an increasingly aggressive Russia – whom America long opposed in the years of the Cold War – as a counter-balance to the fast emerging economic, political and military strength of the Chinese.

In a country which prides itself on having a government of the people, by the people and for the people, a wide-ranging beneath the surface conspiracy has powerful government figures scheming to undermine the rule of law – and democracy itself. The unthinkable is happening. The Deep State, that bogey figure of leftie commentators and writers, is real, about to show its hand and will not stop at assassinating the country’s leader to achieve its aims.

If that is not riveting, contemporary and engrossing enough, Hauty offers an atypical protagonist for his story. Strong female leads are the fashion nowadays, but none half so tough and strong as former soldier Haley Chill, a hick chick from the sticks of impoverished West Virginia.

Hayley is an instantly likeable character, indomitable and with real impact with whom readers will find it hard not to become emotionally invested. One of the few women to succeed in passing all the required tests to serve in the combat infantry, she is a natural fighter and a near-international standard boxer,who refuses to accept defeat.

Above all else, she is a genuine patriot – typical of so many American servicemen and women I have met – sworn at all costs to ‘preserve and protect’ her nation’s leader.
Quitting the Army to become a White House Intern for a year, she is assigned to the President’s tough and experienced chief of staff. When, delivering briefing papers to his home, she discovers him dead on the floor and a unique bootmark in the snow outside, she suspects foul play. Initial examinations point to a heart attack, but more detailed post-mortems reveal a small quantity of drugs with the fatal attack electronically induced.

Having stumbled across a plot to kill the President, she has no choice but to confront the forces deep within the government. Haley finds herself a suspect of this cabal and knows her life is in danger. Her dead boss’s admonition to ‘trust no one’ is always in her mind as she weighs who she can or cannot trust as she begins to piece together the conspiracy, while staying one step ahead of the killers.

This is an edge-of-your-seat, fast-paced, jarring, intriguing, kick-ass thriller, perfectly placed in the current American political climate, which will keep you turning pages into the night until you reach the shocking wrap-around prologue/ending. And that is perhaps the only time Hauty betrays his background as a Hollywood screenwriter. It’s all a bit too convenient. Otherwise this brilliant page-turner packed with enough drama to maintain suspense throughout, is not such a great stretch of the imagination as to be unbelievable.

Character development is perfect with just enough background to even minor characters to be able to understand their motivations – and a few nice sidebars illustrating their past and futures, without detracting from the main narrative. As political thrillers go, this is up with the very best. It marks Hauty as a name to look out for – and we must hope that he is not as accurate a prophet as he is skilled an author!