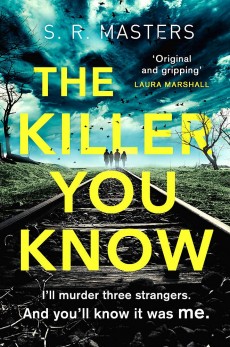 The Killer You Know

They thought Will’s teenage vow to kill three people was a joke. Now Adeline and her friends are not so sure.

Adeline hasn't seen Will, Steve, Jen or Rupesh for 15 years, so she is surprised, shocked and more than a little intrigued when she gets an invitation to a pre-Christmas reunion of her old gang. Adeline returns to the small, isolated village of Blythe where she lived during her late teenage years; the village where bad memories as well as her antagonistic mother and weak-willed father still live.

As the group reminisces, they remember a promise that Will made one night all those years ago – a disturbing promise to murder three people that came from an observation about serial killers. But Will is not there to laugh it off. He has not turned up. And he is out of contact.

Curious, Adeline and the others search online for crimes that fit the murders Will described and discover two murders that match exactly. The gang starts searching for Will. But he is not coming out of hiding any time soon. Then they start receiving mysterious letters and someone close to them is injured.
They cannot be sure it is Will, but someone is playing a sinister game, and if the gang doesn't play by the rules, one of them will be hurt. Or worse.
From the start, The Killer You Know reminded me of CJ Tudor’s novel, The Chalk Man, with its genre-splitting part coming-of-age, part mystery-suspense feel. Equally so, like The Chalk Man, the writing style is distinct, bold and of a high quality. Yet in no way is this excellent debut a copy of that other story.
The engaging and surprising characters in this character-driven novel are as much a hook as the plot, almost letting the reader into their gang. Masters deftly portrays the ever-shifting dynamics and evolving loyalties of these former teens – now adults, using the pull of their shared history of bright, yet bittersweet and dark times.
It is this fascinating chemistry of relationships that drives this disturbing tale, one formed of sometimes mingled, often disparate perspectives. The sprinkling of film and music references from the 1990s grounds the reader, giving an excellent sense of time.
The Killer You Know is in four parts, swinging between the gang’s teenage escapades in 1997/98 and their search for Will in 2015/16. The chapters are relatively long, voiced in the present day by Adeline in the first-person point of view and in the past by each gang member in the third person perspective. The five main characters are realistic, each flawed and irritating at times as their stories, past and present, unfold.
This debut author does not waste page space with meh or dull or irrelevances. The vivid descriptions of Blythe and its surrounds are portrayed convincingly through the eyes of teenagers as well as those of adults. The fictitious village and the countryside hemming it in are so alive that I recognised them as places I would have enjoyed exploring when I was a teenager – places that were fun during the day but oozed sinister during the hours of darkness.
Love, jealousy, friendship, manipulation, deception, along with people and events not always being what they appear, put the flesh on the bones of this plot. There are enough twists to keep most readers guessing. The Killer You Know is a compelling read.