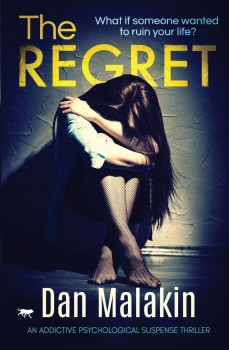 Someone is stalking Rachel again, but no one seems to care.

Rachel Stone was stalked a few years back. It's taken time, patience and heartache, but her life is finally on track, even if it’s not quite perfect. She’s in a new relationship, has a three-year-old daughter, and is working as a nurse in the local hospital. Her old partner, anorexia, is behind her in a past she is trying to forget.

But now someone is stalking her again. Her phone, emails and social media accounts are being hacked. She's afraid and convinced it is Alan Griffith, the man who drove a train through her life with his obsession and stalking. She checks with the prison and learns that he was released just two weeks ago. She's knows he is looking for revenge.

But no one is listening to her. Not Konrad, her new boyfriend. Not her best friend. Not her colleague and friend, Spence, and not her daughter's father.

A warning and a hats-off in one sentence. Dan Malakin’s accurate, heart-wrenching and in places brutal portrayal of anorexia is hard, offering the reader nowhere to hide. He brings this devastating disorder to life, almost like an extra character. Either the author has spent time in the company of anorexia, or he is an A to Z researcher.
The characters are vibrant and well developed, which gives substance to their often dark and sometimes warped behaviour. Rachel, in particular, is a real protagonist, flawed to the point of broken, who I loved and hated in equal measures. But she is one I never stopped feeling for. Malakin knew how to get me to invest in her.
The Regret is one of those books that may have the reader oscillating between wanting to know the outcome and not wanting to get to the end. It’s mesmerising, if that is a word one uses with such a dark tale. It’s a psychological thriller at the top end of wow, from a debut author who found his voice from the moment he opened his metaphorical mouth. And it’s a taut and suspenseful read with a good dose of red herrings and misdirection to delay the reader from discovering who is terrorising Rachel.

The identity fraud is interesting, and being naïve, I didn’t realise the work that goes into it. However, the frequent detailed description of how to hack information online eventually niggled instead of arousing curiosity. It became more about the author blowing a trumpet about his computer knowledge.
That said, the language choice and writing style are easy to read without a sense of the author dumbing down any technical bits. And it is one of those rare books where there are few wasted words, particularly when it comes to detail and imagery.
The story reminded me of how dark the internet can be and how grateful I am that my own family missed out on its Pied Piper influence over youngsters. Topless photos going viral, doxing, cyber bullying are real issues and the author’s inclusion of them not only sets the story absolutely in today’s world, but also reminds his readers that this is real.
There is a satisfying plot that offers danger, addiction, an eating disorder, internet hacking, stalking and plenty of regret. This is a book to read, not read about. The Regret is a cracking debut.