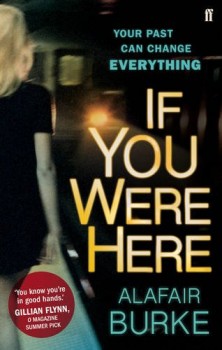 If You Were Here

A journalist investigating a subway rescue identifies the saviour as a friend who disappeared ten years ago, triggering a reappraisal of the past.

A woman makes a determined attempt to recover her iPhone after it is snatched by a thief in the New York subway, succeeding against her assailant in a feat of skill and strength. Magazine journalist McKenna Jordan locates a video of the incident and identifies the woman as Susan Hauptmann, a friend who disappeared ten years previously.

With only very thin clues she pursues the matter further, but progress is almost immediately disrupted by interference with her emails which puts her in big trouble with her employers and with the FBI. Nonetheless, Jordan perseveres, as Susan’s disappearance is tied in with major events in her own life, and there is a resolution to the mystery that promises to have great personal significance.

The book is largely plot-driven, with many twists and turns, and possible suspects lined up for consideration, including Jordan’s husband Patrick. In parallel with Jordan’s investigations, a shadowy figure identified as Carter is pursuing Susan, helped by the tracker his employer has placed in her phone, and doing his best to wipe all evidence to Susan’s existence. Skulduggery is clearly afoot but the perpetrators and their objective, remain unclear until the final pages. Some of the elements do, however, become evident at an earlier stage, and there is fun to be had in re-examining the pieces and speculating on the responsibility of the key participants.

The author’s skill in interweaving the multiple characters and motivations, and the paced release of information to maintain the tension until the end of the book, is admirable. But there are problems with some aspects of the plot. Susan has supposedly spent the last ten years doing undercover work in USA and abroad based on her reputation, but this seems a little problematic given that she has been living under an assumed name and evading contact with anyone from her gregarious former life.

The other effect of the focus on plot is the reduced opportunity for development of character. Despite the insertion of occasional chunks of back story, and frequent digressions by the protagonist about her hopes and fears, none of the cast really emerge as convincing people, even Jordan herself. Alafair Burke’s understanding of the workings of the journalistic, legal and police worlds in New York are, however, not to be challenged.