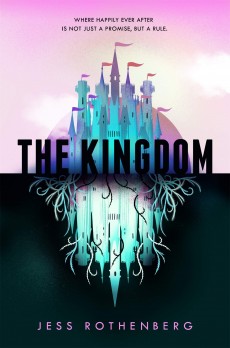 The Kingdom is a fantasy theme park, home to hybrids, living creatures, some extinct, some rare and some human. The Fantasists are beautiful hybrid women, designed as perfect hosts but are they capable of murder?

Ana is a hybrid creation, part-human, part-technology. She is one of a group of seven perfect princesses who help visitors to The Kingdom to feel special and engaged. However, the Fantasists are supposed to behave according to their programme and not to step outside of the rules.

The life of the Fantasists has echoes of the handmaids in The Handmaid’s Tale, full of prescribed rules and rituals, controlled by ‘Daddy’ and ‘Mummy’. They interact with visitors but are felt to be unable to form relationships or to have original thoughts. However, they are hosts to sophisticated AI, and there is always the possibility that they could evolve into something more.

Ana is on trial, accused of murdering a park employee. Her trial expands into a trial of the whole principle of the morality and ethics of the way that the park runs. The story is told mainly through memory and flashback, in which, in Ana’s words, the sequence of events is explained and also the whole panorama of the park is explored.

The Kingdom is enormous in scope with recreated landscapes, each with their own climate, with ‘living’ organism recreated and interacting in the pseudo environments. There are armies of guards and people who tend the animals and people who maintain the park. The Kingdom is so much more than Disneyland and at times reminiscent of Jurassic Park.

The novel uses court transcripts to enable the consideration of the ethical issues regarding the creation of hybrid beings. And there is also a menacing story in which the attitude of humans to the Fantasias is explored along with their exposure to discrimination, exploitation and manipulation.

When the book starts it has the air of a book about Disney princesses brought to life, but make sure you persevere, as this young adult narrative becomes increasingly dark. As Ana’s growing awareness and understanding is explored, so subplots make you question the reality of her thought processes. Is she truly just an automaton after all?

There is a murder and there is a solution but the book actually, quite cleverly, explores so much more. I did not expect to be recommending this book when I started. I did not even think I would read it to the end, but I did. I recommend you do the same.