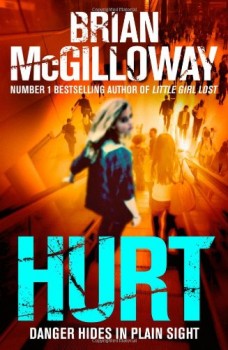 Detective Lucy Black of Northern Ireland’s Public Protection Unit is called in to identify the body of a dead teenager. Someone is preying on vulnerable girls and Lucy needs to find a missing teenager before she too ends up dead.

A 16-year-old girl is found dead on a railway track, her body posed to look like she’s been killed by a train, but her killer is out of luck: the train breaks down before it reaches her and so fails to disguise the fact that her throat has been cut.

Detective Sergeant Lucy Black is called in from Northern Ireland’s Public Protection Unit to identify the body.She recognises Karen Hughes, the daughter of a father serving time for murder and an alcoholic, neglectful mother. Lucy delves into the last few weeks of Karen’s life, where the only clues to what has been going on are her mobile phone and her Facebook account, and becomes convinced that someone has been preying on the girl’s vulnerability.

Brian McGilloway presents another bleak but compelling look at the underside of life through the eyes of a police officer immersed in the world of children and adults living on the fringes of society, at risk as much from their own families as from strangers. Lucy Black, as is the custom in crime fiction, is haunted by her own demons, in this case her failure to save a young woman who died in a fire, orphaning her baby son. Lucy’s problems are compounded by the fact that she’s the daughter of the Assistant Chief Constable, something that only a few of her colleagues know.

Lucy is street-wise and has a smart mouth, not always a good combination when it comes to concealing her relationship with the ACC. She’s an interesting and sympathetic main character, and her past doesn’t overwhelm the main thrust of the story. The dark side of Derry is skilfully evoked and Hurt relentlessly gathers pace as Lucy struggles to make sense of who is ultimately preying on a succession of young girls.

Suspects come and go, sometimes in quite dramatic fashion, as community tensions run high with the suspicion of paedophiles in their midst. The stark and distinctly unpalatable phenomenon of recreational rioting is well and chillingly depicted, as are the consequences of mob rule.

In the latter stages of the book I felt like I was reading through my hands, trying to distance myself from a story that seemed to be getting bleaker even as it became ever more compelling and, as usual with McGilloway, the answers are not always the predictable ones.