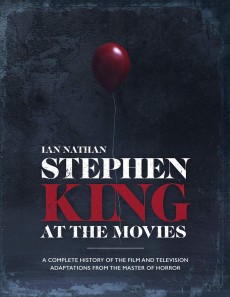 Stephen King at the Movies

An encyclopaedia of every Stephen King book brought to the screen, including interviews, critical analysis, behind the scenes insights and photographs.

They’ve been turning Stephen King novels into television shows and cinematic movies since 1976. Stephen King at the Movies charts the history of the best-selling author on film, from Carrie to the very recent blockbuster Doctor Sleep. Not all of them have been hits, indeed not all of them have been appreciated by the fans or the man himself. But each one has at least two stories behind it and in this book, Ian Nathan lays out the highs and lows of Stephen King on film in glorious technicolour.

This is a beautiful encyclopaedia, starting with an introduction to the writer and his work, before going on to chart a history of the translation of his novels and short stories from page to screen. Each entry features a list of the people involved and the history of the production, some more in-depth than others, as well as beautiful stills and images of the original posters. There are interviews with Stephen King, as well as actors, directors and producers which give further insight into the sheer determination and drive that have brought these adaptions to screen.

Each page is a glossy tribute to the work of one of our generation’s most prolific writers. His stories have been brought to the screen with varying degrees of success. Some of the movies are classics – The Shining and Stand by Me – while others have become cult favourites, such as The Running Man and the original IT. In more recent years, both television and movie adaptions, such as the remake of IT Parts 1 and 2, Doctor Sleep and Haven, have enjoyed both critical and commercial success. I was fascinated to read the background of titles I seem to have been watching all my life, learning about the trials and tribulations that almost kept some of them from ever making it to screen.

There are other interesting snippets too, such as a list of The Ones That Got Away, productions that might have been but never were, and there’s a section on Castle Rock, a show not strictly based on a Stephen King novel but on all his novels, bringing together many of his famous characters to interact with the people and places we know as fans. It’s a love letter to Stephen King’s work, and as Ian Nathan says, could almost be a translation to television of this book.

It’s a must-have for any Stephen King fan, or anyone interested in the background to some of the most important and well-known movies of our time, as well as some not so well-known, and not so well received. It’s written and presented with a deep respect and love for the source material, and for the effort and dedication applied to each feature by those who worked on them, however revered or despised the resulting production may be.