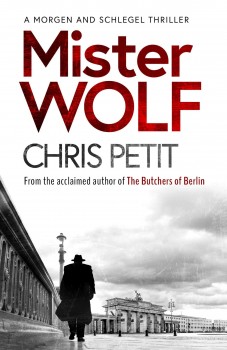 In 1944, as the allies close in on Germany and Hitler miraculously survives an assassination attempt, Gestapo officer August Schlegel becomes caught up in a scandal thought to be long buried.

Mister Wolf follows two of Chris Petit’s previous books set in Germany in the later stages of World War II – Butchers of Berlin and Pale Horse Riding. The central characters are again Schlegel of the Gestapo and Morgan of the SS, investigators of relatively junior rank whose duties bring them into contact with figures at the top of the Nazi hierarchy.

The action immediately follows the events of July 20 1944, a failed attempt to assassinate Hitler. Rumour washes around the power centres in Berlin: Hitler was killed, he survived but was badly injured. The truth is difficult to ascertain, as doubles took Hitler’s place for many public appearances. Schlegel follows up a fire at a clinic where one of these doubles is killed, giving rise to suspicion that the real Hitler is elsewhere.

Schlegel is, however, being pressed into service on another matter, an issue thought to have been resolved long ago. In 1931, Hitler’s niece Geli died, reportedly by suicide, although alternative explanations were whispered. Geli lived in Hitler’s house and there was some romantic attachment, but her carefree lifestyle could have proved an embarrassment had she survived.

Now some 13 years later there comes unexpected interest from several parties, including Hitler’s secretary Martin Borman, Himmler, and Schlegel’s chief, Gestapo Muller. There is said to be a written ‘confession’ by Hitler. Mixed up in the matter is Schlegel’s father Anton, who August thought was long dead but now appears to have been alive all the time.

It would be difficult to beat Petit for complexity of plot and it calls for some nimbleness of mind to keep up as the protagonists come across conspiracies within conspiracies. Petit shows how authority within the Nazi hierarchy was always divided, with strange overleaps and divisions, and facts obscured by fervour and superstition. The obsession with record-keeping provides the sole basis for certainty about past events.

The weird mental aberrations of the time come across, with Hitler increasingly retreating into a dream-world and his lieutenants, with the greatest cynicism, positioning themselves for future eventualities so as to emerge ahead of their rivals. The corruption at the heart of the regime becomes ever more rampant as it is increasingly evident that the days of the Third Reich are numbered.

The difficulty a reader has with all this is the natural disgust with those who, despite the problem of living within a society gone mad, are still surviving and exerting authority. Occasional reference to the torture and murder of others centre more on the impact this has on the perpetrators than on the crimes themselves. Nonetheless, the dense plotting and stream of unexpected revelations keep the reader on their toes in this authoritative exploration of the heart of the Nazi state.