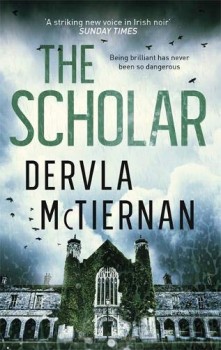 Garda DI Cormac Reilly is called by his girlfriend Emma when she comes across a hit-and-run victim, and despite their connection he is assigned the case.

DI Cormac Reilly first appeared in The Ruin, returning to Galway after 12 years in Dublin to find the office strangely uncongenial. As The Scholar opens he has been restricted to cold cases for a year, and it is only when his colleague Carrie O’Halloran protests to their boss about her caseload that he is passed some current work.

One of these cases concerns Rob Henderson, a man caught red-handed rigging his family home to fill it with carbon dioxide. Despite the obvious intention to kill his wife and three children, he is feigning mental illness and his wife, through denial or fear, seems unable to provide any clues to the clearly strained atmosphere at home. Reilly’s empathetic approach gets results.

Another new case arises from a girl killed by a car; the driver’s repeated attempts to crush her make it clear the death was intentional. The involvement of Reilly’s girlfriend Emma, albeit only as discoverer of the body, makes it inappropriate that he should take charge of the case. Identification of the victim only reinforces this problem, since it confirms that Emma did in fact know her.

The death occurred outside a laboratory operated by Darcy Therapeutics, Ireland’s most successful pharmaceutical company, and the victim carried in her pocket the ID card of Carline Darcy, granddaughter of the founder of the company. Reilly’s investigations suggest that the death was linked to the lab, and possibly to Emma herself. Despite being pushed off the case, Reilly pursues key leads to get a result.

This is an engrossing police procedural featuring an efficient and sympathetic detective. There appears to be some prejudice against him from his superior, and one of his subordinates has the knife in too. But the main problem with his major case result from the reluctance of locals to challenge a powerful company. Reilly makes steady progress, exhibiting both persistence and bravery, despite a consistent and sinister rearguard action by John Darcy, the founder.

The other complication, revolving around his girlfriend Emma, calls for different virtues. His uncertainty about the involvement of Emma in events at the lab is complicated by her past, which gave ample evidence that she is capable of desperate measures where necessary. Reilly’s instinct as her partner does battle with his suspicions as a policeman.

Although Reilly is the central focus, the book proper opens with O’Halloran in charge of the case, and she resumes control at the end. We hear about her during the book, her struggle with the hours she works, the family problems, and the guilt arising from this. It felt at times as if the author found O’Halloran hard to shut out. Perhaps Dervla McTiernan will give her a book of her own.