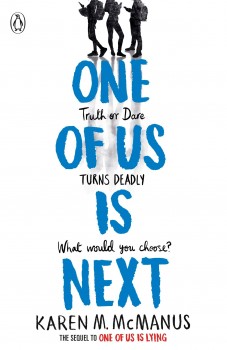 One of Us is Next

An ever-escalating game of Truth or Dare brings heartache and danger to the students of Bayview High.

A year has passed since the explosive events of One of Us Is Lying, but it doesn’t take much to thrust the students at Bayview High back into a climate of fear and suspicion. The latest YA thriller from Karen M McManus starts with a vignette of reaction to the death of an unknown student, then jumps back ten weeks in time to a Reddit thread called Vengeance is Mine, which harks back to an old site started by Simon Kelleher, the focus of the previous book. This time, the puppet master goes by the username of Darkestmind, and the person who wants vengeance is Bayview2020 who claims someone has wrecked their life.

When Bayview High students start getting anonymous texts challenging them to take part in a game of Truth or Dare, tongues quickly start wagging but no one knows who’s behind it, despite links to the previous forum designed to set friends against each other. At first the dares seem mostly harmless, and the truths funny, but that soon changes as darker elements of danger and unpleasantness creep in, leaving the recipients of the text message not wanting to play, but not daring to do otherwise.

In One of Us Is Lying, Bronwen, Cooper, Addy and Nate banded together to prove their innocence, and all became something of a legend in Bayview High. But now the climate of fear and suspicion is back to haunt a new generation of 17-year-olds, leaving them to find out the hard way who are friends and allies and who aren’t.

The point of view characters this time are Maeve, Knox and Phoebe. Maeve, Bronwen’s younger sister, is under pressure to do something about her college applications but a deep seated fear that her remission from leukaemia has come to an end is holding her back, as it’s hard to make plans for a future that she doesn’t think she’ll live to see. Knox is Maeve’s first boyfriend until they realised that they were better off as friends, but that brief attempt at a relationship will turn into Knox’s Achilles’ Heel. And talking of complex relationships, Phoebe is struggling to understand what’s gone wrong between her and Emma, her older sister, but is thankful that things are less complicated with her younger brother Owen.

Chapters headed with the name of who’s telling each part of the tale and the date make it easier to keep track of the story and its various narrators, and McManus differentiates well between the three, giving them their own voices. There are a lot of characters to keep straight in your mind, and these handy reference points do help, but there are times when I wouldn’t have minded a crib sheet and some essay notes to refer to!

The story moves on at a brisk pace as the revelations keep coming and the danger ramps up to the expected death at the end of the first half of the book. After that, it’s a case of untangling a complex series of heightened emotions, and grudges both large and small. McManus does an excellent job of laying bare the complexities of teenage relationships, some sexual, some purely based on friendship. Her characters talk, act and think like authentic teens and I really liked getting to know the next generation of Bayview High students, whilst also enjoying the follow-up glimpses into the everyday lives of the last crop of teenagers to be put through the mill. Addy Prentiss, former beauty queen, is now marrying Eli, whose law firm, Until Proven, Knox is interning for.

Even seemingly disparate plot threads are all connected somehow, and the trick is following the connection and picking up on the subtle clues dropped throughout the narrative. Figuring out anything like this isn’t my forte, so I just sat back and enjoyed the ride, and watched a very tangled web finally unravel to reveal the secret of the spider at its centre. McManus has delivered another high-quality teen thriller and a worthy successor to her previous excursion into the unhallowed halls of Bayview High.