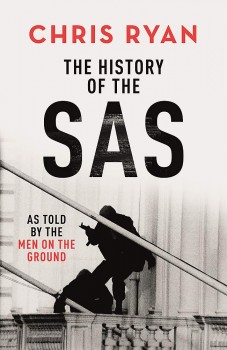 The History of the SAS

The history of the SAS, told from the inside.

For an unabashed fan of military thrillers, I certainly wasn’t going to pass up the chance to read an insider’s history of the SAS written by soldier-turned-writer Chris Ryan, even though there is no shortage of books on the subject of Britain’s elite special forces regiment. The one that immediately springs to mind is Tony Geraghty’s Who Dares Wins from 2002.

There’s also no shortage of ex-SAS men turning their hand to writing. Andy McNab is probably the best known. McNab is a pseudonym for one of the soldiers from the ill-fated Bravo Two Zero mission in the first Gulf War that catapulted the Regiment, as they are more usually known, into the headlines around the world. Ryan’s own memoir on the subject, The One Who Got Away, never quite achieved the same fame, and it’s possibly no surprise that McNab’s book doesn’t get a mention in Ryan’s bibliography.

The SAS was founded in 1941 by David Stirling. They operated deep behind enemy lines in the North African desert, achieving notable success, but with the end of the war came an end to the Brigade, as it then was, and it was disbanded. Then in the early 1950s, the unit was revived to join the fight against the Communist guerrillas operating deep inside the jungles of Malaya.

Since then, the SAS has been deployed to just about every one of the world’s hot spots, operating in the most challenging conditions imaginable. In addition to the more conventional war zones such as the two Gulf wars, they’ve gone up against drug runners and terrorists, proved themselves adept in both jungle and desert conditions, and excelled in numerous hostage rescue scenarios. From shaky post-war beginnings they’ve risen to become one of the most renowned regiments in the British army, with perhaps the most challenging entry requirements of any of the world’s special forces.

Ryan sets out to write a history of the SAS from the point of view of the man on the ground, and there’s no doubt in my mind that he succeeds admirably. The book is as readable as any of his thrillers, starting with a detailed examination of the origins of the modern SAS in the jungles of Malaya and then to a daring operation in Oman where they were charged with re-taking the rebel stronghold of the Jebel Akhdar, a seemingly impregnable mountain stronghold that was last conquered by the Persians in the tenth century. The story reads like one of the more outlandish military thrillers to grace my bookshelves and amply demonstrates what a small, highly trained force can achieve against seemingly impossible odds.

That theme of success against the odds runs throughout the book and, after reading the section of the book that gives a very personal account of the rigours of the sometimes controversial SAS selection, it’s no surprise that the men of this elite fighting force pull off such daring and high profile operations as bringing the 1980 Iranian Embassy siege to an end. Ryan amply demonstrates the rigour of what aspiring soldiers have to go through to gain the sand-coloured beret with its iconic badge, but makes no mention of the problematic nature of what the soldiers have to undergo, which in 2013 resulted in the death of three SAS reservists from heatstroke during an exercise in the Brecon Beacons.

Ryan takes the reader through an exhaustive – and exhausting – catalogue of the various theatres of war and civil insurrection that the SAS has been involved with, showing how each success led to seemingly greater demands on the force, often in the face of wholly inadequate kit and back-up. Those who are old enough to remember the first Gulf War will no doubt remember the complaints in the press at the time about how the standard issue equipment was wholly inadequate in the face of modern desert warfare. But despite that, the Regiment achieved many notable successes, including their ability to prevent the highly mobile Scud missile platforms raining more death and destruction down on Israel and potential dragging them into the war and thus leading to the breakup of the fragile alliance against Saddam Hussein’s Iraq.

Ryan doesn’t dwell particularly on the catalogue or errors that led to the disastrous Bravo Two Zero which saw some members of the patrol killed and others captured. He only just succeeded in evading capture in what is still the longest-running pursuits in the Regiment’s history. There’s a palpable sense of Ryan’s resentment of the Head Shed, as the military top brass is often known, sending them out inadequately prepared and equipped for their mission and exposes the insular nature of the thinking at higher military and diplomatic levels and their refusal to share intelligence even amongst their own allies.

Blunders such as an entire consignment of Claymore mines going missing, and soldiers having to scrounge much-needed grenades off their better-equipped US counterparts make hard reading, and also demonstrate why memoirs such as Ryan’s own story of this mission are unpopular back in Hereford, the home of 22 SAS.

The book is both a fascinating history of the development of arguably the UK’s key military resource and a damning indictment of those who ask soldiers to potentially pay the ultimate price but then don’t give them the tools they need to carry out dangerous and often utterly thankless tasks. As Ryan’s history comes forward in time, he makes it clear that there have been definite improvements in planning and resourcing in general, and I ended with the feeling that in today’s increasingly uncertain world, where even cars and trucks are weaponised by terrorists at home and abroad, the SAS is at last being given the support they need to do what is asked of them.

The History of the SAS is a fascinating inside look at an elite fighting force from the inside, with a boots-on-the-ground authenticity that only a lived experience can bring to this particular party. A word of warning, though – there are times when it felt like I was drowning in a gloopy acronym soup, struggling to tell BATTS from COINs and trying to remember the difference between HAHO and HALO. But for those who don’t have a military background, there is a much-needed glossary at the back of the book for the terminally confused.