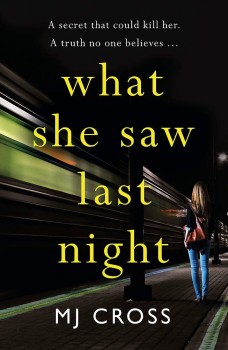 What She Saw Last Night

Jenny thought her night on the sleeper train to Scotland would be uneventful. Now she is staring at a dead woman in a nearby compartment, and there is no sign of the woman’s daughter.

Jenny Bowen has decided to take the train to Scotland, where she must get her late parents’ house ready for sale. Perhaps the long, slow journey will give her a good night’s sleep and distance her from the fall-out of finding that message on her husband’s phone. The one that proved he was having an affair.
Boarding barely in time, Jenny runs the gauntlet trying to find her compartment, and briefly interacts with a stressed-looking woman, picking up the toy rabbit that clearly belongs to the little girl in the background.
Something wakes Jenny in the middle of the night. Something that she foolishly leaves her compartment to check out. The stressed woman is dead, and there is no sign of the little girl. And as the police bring their cursory investigation to a close, Jenny learns that there is no record or evidence of the missing child ever being on the train.
Alone with her beliefs that the girl has been abducted or worse, Jenny steps into a world where the game of the moment is cat and mouse. One she may not survive.
This is definitely fast food, not gourmet eating. I should not have liked this story, riddled as it is with tautology, spoon-fed information, mind-melting, blue-eye-brown-hair-black-jean description, swathes of tell, a plethora of cliff-hanger chapter ends, inconsistencies, generic dialogue and character behaviour that stretches the suspension of disbelief to its limits. But I devoured the book in one sitting, and thoroughly enjoyed my evening of unadulterated escapism.
There is a feel of Agatha Christie to the plot, with more action and less introspection, a combination that would convert well onto the screen. That the main character is a single-minded woman is a breath of fresh air reminding us that not all females are helpless victims. Unfortunately, my initial connection with Jenny disintegrated as the murder count rose. Yes, this turns into an action rather than psychological thriller, but she brushes one of the murders of two people close to her almost aside. Most people would have found breathing virtually impossible, let alone moving on emotionally. But Jenny seems more interested in solving a mystery than mourning the dead. By the end, I didn’t like or believe in the main character at all.
The story starts off at a pace that teases the reader in, before careering onwards like a highspeed train, with plenty of action scenes. The author is mindful of keeping tension high with his description of the various milieus, particularly the claustrophobic atmosphere of the train. However, many readers these days, me included, find his level of descriptive detail about each character, however minor, tedious and pace-slowing. Readers instinctively build pictures of characters without being spoon-fed, especially if the writing is clever and senses driven.
MJ Cross has written five novels in the Carter Blake series as Mason Cross. What She Saw Last Night is the first under this almost name change and is a standalone novel. But if I remember to read Cross’s next novel when I am hungry for action and fast-food escapism, I’ll know he has won me over.