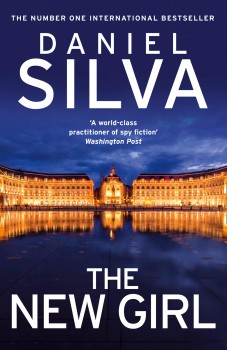 When the daughter of a Saudi Prince is abducted, he turns to the only man he can trust to find her: Gabriel Allon, the legendary chief of Israeli intelligence.

The art of writing a successful espionage ‘faction’ thriller is to stick as near to reality as possible. Real personalities, even heavily disguised, and events altered only to fit the plot, are the key to keeping the reader’s eye on the page. That modern master Frederick Forysth set the bar at a near impossible level. Few have come close until now.

Daniel Silva has gradually built up and improved his long running series – this is the 19th – featuring Israeli spy and art restorer Gabriel Allon. The New Girl is his best by far. Up to the minute as tomorrow’s headlines, instantly recognisable real-life characters, full of double and triple turns, this is a dark thriller for difficult times, the intense momentum kept racing along by Silva’s creative genius and his mastery of storytelling lit by flashes of some very dark humour.

The storyline is inspired by events which have made world headlines over the past year – and will continue to do so. The action takes place in Israel, Saudi Arabia, Switzerland, France, Germany, England and America and includes plenty of characters familiar from earlier novels in the series. It works well as a standalone, but well-researched plots like these which make you question what really lies behind the headlines should also point you to the earlier books to see the development of the characters.

Mossad master spy Allon reassembles the international team who have served him so well. Sarah Bancroft returns from retirement in the art world. MI6 man and former professional killer Keller is back, along with his boss Graham. Gabriel and Graham did not part on a friendly note, but this time the ‘Office’ knows things which can help Graham steady a wobbling agency discredited by defections and failures.

Gabriel himself never changes. Never one for the office and needing to be in the midst of the action, his capability to work as field-based director is incredible, bolstered by his relationship with his art and enhanced by his wife, Chiara, the woman who always seems to know the way to steer him around the most cruel aspects of his work, and his amazing twins.

A beautiful raven-haired young girl, said to be the daughter of an international businessman who arrives each day in a motorcade fit for a head of state is abducted from an exclusive Swiss private school. Her father, in fact, is Khalid bin Mohammed – or KBM as he is known – crown prince of Saudi Arabia. Once feted for his daring, although quite minor, social and religious reforms, he is now reviled in the liberal West for his alleged role in the murder of a dissident journalist.

When his only child is kidnapped, he turns to the one man he can trust to find her. Allon, the legendary chief of Israeli intelligence, has spent most of his life fighting terrorists, including the jihadists spawned and financed by Saudi Arabia’s Wahhabist extremists. He sees Prince Khalid as a flawed, but valuable, partner in a daring long-term plan to break the bond between the Kingdom and radical Islam. These unlikely allies embark on a secret war for control of the Middle East with the child’s life and even the Saudi throne in the balance.

Silva cleverly exploits the relationship that develops between his Crown Prince and Allon. Understandably sceptical and wary, events force them to learn to trust each other and develop what seems as if it could become something which might ultimately benefit both their countries. And he always does a great job at humanising his antagonists. They are rarely mindless fanatics – even the physical and behavioural characteristics of the US president and the ‘Tsar’ of all the Russians leaves little doubt as to whom he is describing.

There are several surprising elements to this story – although not essential to plot and relating specifically to Israel – which are quite moving, but mostly Silva maintains his storytelling integrity and drives his plot to unfold almost exactly with the near pre-ordained route you would expect.

It’s quite brilliant, probably the best ‘faction’ spy story I’ve read since The Day of the Jackal!