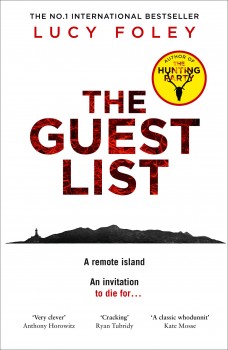 False smiles, fake camaraderie, family feuds and a four-tiered cake. Nothing outstanding, despite the eyewatering invoice. But this wedding is going to be more than the usual hell for one member of the party.

There is nothing between the tiny island and America, except the distant storm edging towards the western Ireland coast. But for now, the early arrivals for Jules’ and Will’s wedding are enjoying the untamed scenery, the flow of alcohol and the odd spliff.
Some are more relaxed than others. Will’s closest schoolfriends, soon to be ushers, seem to regress further towards unruly adolescent behaviour with each hour. Charlie, Jules’ oldest friend, is not so chilled, and neither is his wife, Hannah. But neither is sharing the reason for their angst with the other. In fact, Hannah finds it easier to be herself with Jules’ sister, Olivia, than her husband right now.
As for the happy couple, they are about to find out a smile takes its toll on the facial muscles, particularly when it’s fake. Lies, family secrets, suicides and murder have followed the wedding party to the island. Now it is up to the wedding planner to keep the inevitable storm at bay.
But no-one can hold back a tempest.
Midsomer Murders follows a formula, as do many captivating whodunits. I am hovering between cheering Lucy Foley for finding a blueprint that works and pointing her towards the hot coals that someone may haul her over for becoming formulaic in her plots.
As I wrote, when I reviewed her excellent debut, The Hunting Party: “This is not a thriller … It is a delightfully atmospheric who-was-it-‘n-who-dunit suspense story that makes full use of the isolated milieu to darken the mood. The author dangles the identity of the victim just out of sight until near the end, although I had my suspicions from extremely early on.”
I have absolutely no need to change that introduction.
Foley’s senses-driven writing brings Cormorant Island to life. Whether it exists is irrelevant. My stomach churned on the sea crossing. I have shivered, crossing the semi-abandoned graveyard, picked my way across boggy land and felt dwarfed by the stone folly.
I would say that, like serial killers, the author has a type. She is into 30-something, self-absorbed, self-entitled, relatively wealthy characters, who bully outsiders and lesser mortals. She develops them into believable, three-dimensional characters, even though most of them are twisted, increasingly malevolent – as the glugging of alcohol loosens their already meagre inhibitions – and completely unlikeable. Although there are more victims than the one who stops breathing indefinitely, I would give several of them a good talking to before I offered them a hanky.
I was marginally perturbed by the debatable convenience of some of the initially unknown relationships that gave rise to motives for the inevitable murder. But they niggled rather than completely drowning my pleasure of this gritty, don’t-hold-back-on-the-nasty mystery.
Two books in, I feel have the measure of author, and although she has done a good job to blindside her readers with the identity of the killer, I had sussed from early on who it was.
But that does not spoil the pleasure of reading The Guest List, which, taking my own advice in my review of The Hunting Party, was done in one sitting, on a dark and stormy night, with a small glass of single malt! Keep the stories coming, Lucy Foley …