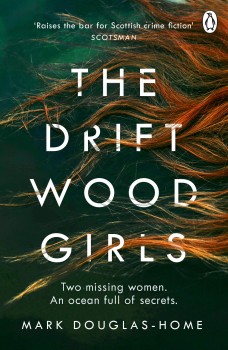 Oceanographer Dr Cal McGill is down on his luck. The press have turned on him, an old friend has left him an unusual legacy and a woman wants him to find her sister. But no one wants to give him paid work and Cal is fast running out of money …

Oceanographer Dr Cal McGill, nicknamed by the press the Sea Detective, is having a rough time. He’s being blamed for not preventing the death of Harry Fowler, 76-year-old man with a health condition that needs urgent treatment. Cal is getting a pasting in the media and is steadily losing jobs as a result.

The only person who seems to want him to do anything for them is Kate Tolmie, whose sister Flora is missing. The Tolmie family is no stranger to tragedy, as Kate and Flora were orphaned 23 years ago when their mother Christine vanished without trace in northern France. Now, with Flora’s whereabouts unknown, Kate has searched her sister’s Edinburgh flat and found a piece of paper with Cal’s name on and she wants to know what their connection is. Cal is none the wiser, but he’s willing to start looking, even though he doesn’t think there’s much he can do to find the missing woman.

I’ve enjoyed my previous three watery excursions with Cal McGill and The Driftwood Girls proved equally fascinating. Former journalist-turned-novelist Mark Douglas-Home has a light touch with his info dumps but even so, I always come away from the books feeling like I’ve learned something. The sea can be a cruel mistress and in this book it comes over as grey and ever shifting, throwing up flotsam on the shore to be picked over by beachcombers such as the solitary Olaf, an old friend of Cal’s who lives a simple life on Texel, an island off the coast of norther Holland, making driftwood statues to sell to tourists.

Another old friend of Cal’s plays a part as well. Alex Lauder is dead, and has left Cal an unusual legacy, that of organising an illegal watery burial on an inland loch. Cath isn’t keen, but he’s driven to agreeing by his own guilt at having drifted apart from his friend during a terminal illness, a fact that his friend’s mother is determined not to let him forget.

The mystery of the disappearance of Christine Tolmie 23 years ago lies at the heart of this clever, complex book, and casts a long shadow over events in the present day. Cal’s detective work comes over well, with none of the usual conveniences and suspension of disbelief that often plays a part where amateur sleuths are concerned. The reason being, I think, is that Cal is a professional oceanographer and is utterly in his element where winds and tides are concerned.

For anyone who enjoys spending time on or beside the sea then this is the book for you. The Driftwood Girls is as deep and complex as the ocean that lies at its heart. The narrative ebbs and flows between Texel and the mainland of both France and the UK, but like the sea, it takes a while to give up its secrets.