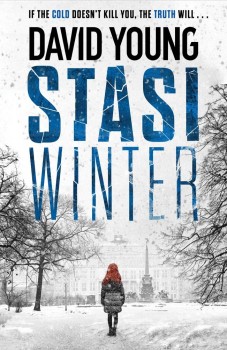 Major Karin Muller is sent to Rugen Island on the Baltic coast to investigate the death of a woman apparently overcome by the savage winter weather.

Stasi Winter is the fifth outing for Karin Muller, a major in the East German State Police Serious Crimes Department. The resignation she lodged in disgust at the end of the last book has not been accepted and as usual the Ministry of State Security, the Stasi, are leaving her little option but to follow directions from on high.

It is therefore with reluctance that she leaves her two young children and grandmother in Berlin, and travels to Rugen Island on the Baltic coast in the severe winter of 1978/79. She is told she is to investigate the death of an unknown woman supposedly overcome by the cold while out shopping, but knows that this can hardly be the justification for sending her so far, not to mention her usual team, subordinate Tilsner and technician Schmidt.

And indeed, on viewing the body she immediately recognises the victim as someone she has met before, at the Jugendwerkhof (or reform school) Prora Ost sited nearby, although locals claim ignorance. To help her work out what is going on, she contacts Irma Behrent, a graduate of that institution who owes her a favour and who now lives in the vicinity.

Irma is less than wholeheartedly cooperative, however, as she knows more than she is prepared to say about the dead woman. Irma has taken a fancy to Dieter, a young man on a construction team formed of those who refuse to serve with regular units of the People’s Army. Dieter’s ‘bad boy’ image is one that Irma finds irresistible. With the Baltic Sea frozen solid, Dieter gets an idea which will end in danger for Irma and Muller too.

I have to say that I enjoyed this book perhaps more than its predecessors, possibly because Muller has finally woken up to the reality of politics in the DDR, so I am no longer irritated by her naivete. I was thus better able to overlook certain questionable plot devices and enjoy what turns out to be an adventure on the ice with plenty of twists and turns.

The weather contributes greatly to the atmosphere; in a postscript the author acknowledges that he borrowed some facets of the even more extreme winter of 1962/63. The cold political climate matches the weather, with Muller’s old nemesis Jager, as ever using her for his own aggrandisement, and behind him ‘Comrade Minister’ Erich Mielke demanding action in the most cynical fashion.

The author uses what might be described as a small palette to describe the reality of the DDR, with the same small cast serving to represent one of the most heavily policed societies ever seen. At the centre, Karin Muller makes a great protagonist, achieving great results notwithstanding the vice-like grip of the state.