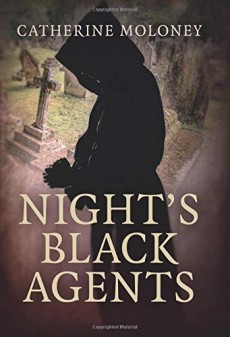 When a nun is found strangled, followed by other deaths, DI Gil Markham must uncover the secrets which threaten to wreck a Catholic order.

Night’s Black Agents is set against a wonderfully described and evocative background of the trials and tribulations of a Catholic Order struggling to fulfil its duty to the shrinking community it serves. Moloney starkly sets out the problems facing the church, yet handles them with some discretion and sympathy.

At the same time, in this third in a clever and insightful series, she once again deals with the very human problems of Markham’s own continuing insecurity over his relationship with girlfriend Olivia and continues to develop the work and personal relationships with his small team of investigators.

His often brash, bull-in-a-china shop deputy, Detective Sergeant George Noakes, comes far more into focus as an experienced officer and some of his more traditional views are explained by the introduction of his wife, a strong woman with social climbing ambitions who dresses – and fights a determined but losing battle to get her husband to do the same – accordingly.

As usual, Olivia manages to become involved in story which opens with her friend Sister Felicity, a former nurse and a member of the Order of St Cecilia, apparently disappearing after failing to return to her room after prayers. When she is found strangled in the confessional box and shortly after the self-important and unpopular church organist meets an even more grisly fate, Markham and Noakes must unravel the secrets of a past which lies behind the mystery – and Olivia to face her conviction that the killings are somehow related to her own past.

As the body count in the monastery continues to rise, and evil proves devastatingly close to home, Markham and his team are baffled. The clues are well-hidden and the team are, as usual, up against it. What is the significance of a substantial request left by a respected and saintly member of a monastery which will enable the financially embarrassed St Cecilia’s to expand its work and take its place as one of the most progressive and leading Orders?

Moloney treats the religious parts of her story with the respect it deserves, although never shying away from some of the more obvious – and widely publicised – failings of the Catholic church. Above all she poses the age-old question: can good ever come of evil?
It’s a great read as a standalone, but many readers will want to go back to books one and two to see how this thoughtful and compelling series has developed.