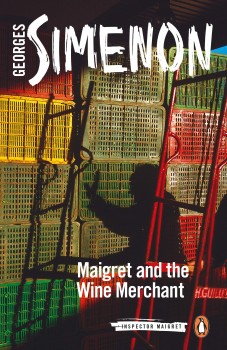 Maigret and the Wine Merchant

When a wealthy wine merchant is shot dead in a Paris street, the lengthy list of people who detested the victim complicates Maigret’s investigation.

The Penguin re-issue of the Maigret stories has now reached an original publication date of 1970, and the detective is in late career with plenty of subordinates to spend hours on the cold winter street where necessary. Maigret is still vulnerable to colds, however, and spends most of this tale fighting a bug.

He is called across town when a man is shot several times and dies outside a brothel with which Maigret is familiar. The victim, Oscar Chabut, is a man from humble beginnings who by energy and drive has forced his way up to being the head of a lucrative wine business. The madame of the house admits Maigret and introduces him to Chabut’s mistress, his secretary, with whom he had been enjoying an assignation that evening.

Investigations soon reveal that there is an extensive list of persons who disliked Chabut, a man who delighted in humbling business rivals and seducing the wives of the bourgeoisie which he had joined since accumulating great wealth. He surrounded himself with weak people who he could dominate and revelled in humiliating them.

Maigret embarks on his usual investigation into the minutiae of Chabut’s life. “He was certain that once he knew him better, he would have no trouble identifying his killer.” The sheer number of potential culprits undermines this belief, and only when he ponders on an employee who recently left Chabut’s employ does he really make progress.

In fact, Maigret’s task is greatly simplified when he starts to receive communications from a man who declines to give his name, but only to state that Chabut was a filthy scoundrel. Maigret soon becomes sure that this is the guilty man, who is looking for an excuse to surrender to him and get a hearing for his story.

This is not the first time that the culprit has dropped into Maigret’s lap in this way, and some readers will find it unconvincing, notwithstanding Maigret’s avuncular reputation and his reluctance to condemn. However, the insights into Paris society both high and low are as good as ever.

What is particularly enjoyable is Maigret’s response to a heavy cold: plenty of brandies, grogs and liquors, continued consumption of Madame Maigret’s lunches and dinners with rich sauces, and denial of his wife’s suggestions that he consult the doctor. It’s not surprising that the detective resembles a fair-sized refrigerator – the miracle is that he hasn’t yet succumbed to a heart attack.