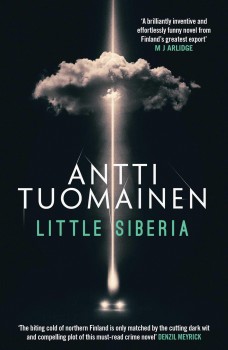 A meteorite lands near a small village in northern Finland and is placed in the local war museum before its journey to London for analysis. Pastor Joel Huhta volunteers to keep watch there at night but immediately realises that various people want to steal the precious rock.

One winter night a meteorite plunges from the sky into a passenger seat of a high-spec rally car, driven at ridiculous speed by an intoxicated former champion who wants to end his life in style. But the spectacular death doesn’t materialise. Instead the cosmic intervention near the village of Hurmevaara stops the suicidal driver and causes the biggest possible stir.

Nobody has heard of this snow-covered place in northern Finnish wilderness until the precious lump of rock discovered there becomes valued at about a million euros. It is placed at the local war museum for four days until specialists from London arrive to retrieve it for research. Instantly, this message from the heavens becomes an object of interest and target for thieves and chancers of any calibre, both provincial and foreign.

Pastor Joel Huhta volunteers to guard this remarkable gem at night. Immediately during the first watch someone attempts to steal it. Joel, a former soldier with vast experience of combat and fighting enemies on the foreign front, feels suited to the role of the main investigator, not attracted by the big money but keen to preserve the treasure for the scientists.
He’s a complicated man, dealing with a magnitude of issues of a personal and public nature as he needs to tend to his followers, including regular conversations with a churchgoer convinced that world is on its last legs. Even though Joel comes from a religious family, doubts about his faith plague him often. War has left him slightly traumatised, and after an accident, also unable to have children, a fact that so far, he has failed to disclose to his wife Krista. When she happily announces that she’s pregnant, he is in shock. Joel can’t be the father and he can’t admit to her what has occurred during his active service. With everything that happens in the village things don’t get any easier and the list of both suspected thieves and fathers of his own child grows by the hour.

Antti Tuomainen is rightly considered to be the funniest crime fiction writer in Europe. But what he delivers is not just a bag of belly laughs. Instead he draws on the innermost personal human feelings, puts them against some serious problems and in the context of conflict between private desires and absurdity of the world he analyses how we all might react.
The results are hilarious, funny, imaginative and often very touching. Like the earlier novels Little Siberia, in brilliant translation by David Hackston, bears all the marks of his honed style, mixing sacred and profane, serious and comical. At the same time, it’s a fast-paced tale of an amateur investigator. The richness of well-developed characters and a dry sense of humour take on the relationships in the village bring this awkward story to another level.
The nearly forgotten isolated place in Finland, close to the Russian border and the potential huge money that may change lives of some of its inhabitants are of course important. Yet the real mastery lies in creating a seemingly ordinary world where unusual things happen, and through the prism of individual reactions, it makes this book not only a great suspenseful thriller but also a philosophical morality tale as well. This is a study of human nature mixed with intrigue, poignant musings and observations.